Face jugs of the American South are the subject of a two-part public program at the Museum of International Folk Art on Sunday, March 22, 1-4pm. John Burrison will give a lecture on the history of this Southern tradition at 1pm, followed by a face jug demonstration by Georgia potter Mike Craven. The programs are in conjunction with the museum’s current exhibition Pottery of the U.S. South: A Living Tradition. Both events are by museum admission. New Mexico residents with ID are free on Sundays.

The face jug is now an icon of Southern folk art. Jugs with sculpted human faces have been made for generations by traditional potters such as members of north Georgia’s Meaders and Hewell families. Where did the idea come from, and what meanings have they had to the makers and owners in the past and today? The earliest Southern examples are from antebellum South Carolina, but were they continuing a pottery tradition brought from the Old World, or are they a uniquely American ceramic expression?

John Burrison’s illustrated talk, “Face Jugs: Southern Tradition, Human Impulse,” will explore possible sources as well as the living tradition of face jugs, and place the Southern examples within a global framework, suggesting that humanoid vessels are virtually universal among clay-working societies. His lecture will take place at 1pm in the Museum of Indian Arts and Culture Kathryn O’Keeffe Theatre. Immediately following the lecture, walk across Milner Plaza to the Museum of International Folk Art’s Atrium, where potter Mike Craven will demonstrate how to make a face jug.

About the Program Participants

John A. Burrison, Ph.D., is Regents’ Professor of English and director of the folklore curriculum at Georgia State University in Atlanta, where he has taught since 1966. He is a leading authority on Georgia folk pottery. His publications include From Mud to Jug: The Folk Potters and Pottery of Northeast Georgia (2010); Roots of a Region: Southern Folk Culture (2007); Storytellers: Folktales and Legends from the South (1989); and Brothers in Clay: The Story of Georgia Folk Pottery (1983). Dr. Burrison has also served as curator at the Folk Pottery Museum of Northeast Georgia since it opened in 2006.

Mike Craven is a 9th-generation potter from a prominent pottery family in northeast Georgia that has been part of this tradition since the early 1800s. He has been working with pottery since he was 11 years old. In 1972, Mike, along with his brother Billy Joe, founded Craven Pottery in Gillsville, Georgia, where Mike Craven continues as principal today. 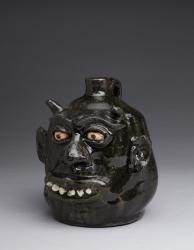 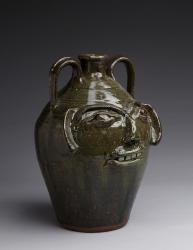 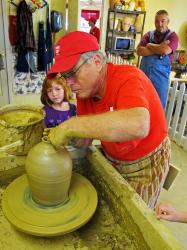 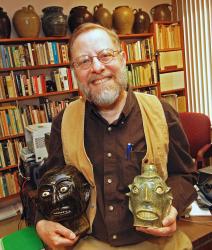