The Art of Historic Children’s Editions

Santa Fe, NM— Native American Picture Books of Change—is an exhibition of original works by Hopi, Navajo, Apache, and Pueblo artists who illustrated children's books in the 1920's through today.

Based on the book of the same title by Rebecca Benes, the exhibition focuses on illustrations in Native American children’s books of the last century. Emerging Indian artists illustrated the stories for Indian students based on Native oral traditions and narratives about everyday Indian life.

These English and bilingual books showcase many of the important rising Indian artists of the period; Andrew Tsinajinnie, Hoke Denetsosie, Velino Shije Herrera, Allan Houser, Pablita Velarde, and others. More contemporary illustrators Jonathan Warm Day and Michael Lacapa will be represented in the exhibition. The role of writers and folklorists Elizabeth De Huff and Ann Nolan Clark will also be included.

The exhibition opens at 2:00 p.m. on February 15, 2009 at the Museum of Indian Arts and Culture/Laboratory of Anthropology. Also at 2:00 p.m. Rebecca Benes will give a free lecture in the Museum’s auditorium, doors open at 1:45 p.m. Original children’s books will be in the Gift Shop and Benes will sign copies of her book Native American Picture Books of Change: The Art of Historic Children’s Editions.The exhibition runs from February 15, 2009 – January 2, 2010.

Beginning in the 1920s, a quiet revolution was stirring the US federal government’s approach to Indian education. Radical for its time, the Bureau of Indian Affairs (BIA) adopted a policy that brought together writers, ethnologists, linguists, and emerging Indian artists to create and illustrate a literature for Indian students based on Native oral traditions and narratives about Indian life. While a legacy of negativity concerning government boarding schools is part of history, these illustrations and most of the children’s books were a positive and shining result for both cultures from these difficult days. In My Mother’s House, in print continuously since 1941, was written because the Native American students expressed to their Anglo-American teachers that “home” was the most important concept to them. Building on that concept author Ann Nolan Clark asked her students to write and illustrate small workbooks. Clark believed that the traditions of the Native American culture was key in developing reading materials that interested the students and to eventual success in cross-cultural education.

“These books are indeed picture books of profound cultural change. Even though they were merely children’s books, they nevertheless introduced both political and cultural changes that were striking and groundbreaking. They bridged Native American and white cultures with stories, many collected or created by authors connected with federal Indian boarding schools in the southwest. The stunning illustrations are by Native American artists, most of whom had been introduced to painting techniques at the same government schools. These were among the first books to contain Native-centered texts and were examples of a rare cultural atmosphere in which both non-Indian and Indian people collaborated to produce works that would benefit Indian children.”(Rebecca Benes)

Native American Picture Books of Change documents four decades of the storybooks for Pueblos, Hopi, Navajo, and Sioux children. A body of work largely lost to history with the dismantling of these programs that brought them forth, these classics of Indian art and Indian-centered cultural education are presented collectively for the first time and placed in the context of Native American self-determination.

A frontis piece from Taytay’s Memories by Fred Kabotie (Hopi) is one of the illustrations included in the exhibition. Other contemporary works on view will be by Velino Shije Herrera (Zia Pueblo), Allan Houser (Chiricahua Apache), Pablita Velarde (Santa Clara Pueblo), Jonathan Warm Day (Taos Pueblo), and Michael Lacapa (Hopi-Tewa-White Mountain Apache); and reproduction illustrations by Hoke Denetsosie (Dine’) from the Little Herder series, whose original art has not been located.

Three items related to the exhibition—unique in their own way will be silver serving utensils Elizabeth DeHuff commissioned which incorporate a new book’s iconography; four rare Pablita Velarde ceramic dolls from the Museum’s collection (only thirty were made); and, the two Big Books, each almost 6 feet tall and illustrated. These books will have an audio component with the stories narrated for the audience. One big book is Little Herder in Autumn, “open” to a page of bi-lingual text with an illustration of weaving. The other big book is Swift Eagle of the Rio Grande with an eye-catching bright purple cover. The “open” page in this book features the original illustration behind plexi-glass of “Koshare tweaked Swift Eagle’s nose.”

For images please visit the Media Center at http://media.museumofnewmexico.org/

Located on Museum Hill™, the Museum of Indian Arts and Culture shares the beautiful Milner Plaza with the Museum of International Folk Art. Here, Now and Always, a major ongoing exhibition combines the voices of living Native Americans with ancient and contemporary artifacts and interactive multimedia to tell the complex stories of the Southwest. The Buchsbaum Gallery displays ceramics from the region’s pueblos. Five changing galleries present exhibits on subjects ranging from archaeological excavations to contemporary art. In addition, an outdoor sculpture garden offers rotating exhibits of works by Native American sculptors. 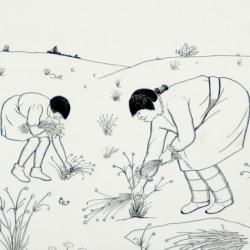 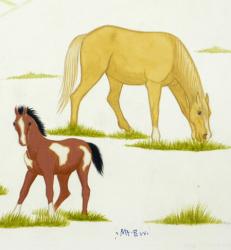 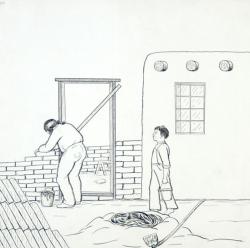 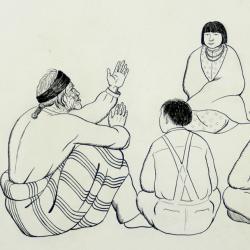 Grandfather telling stories to the children 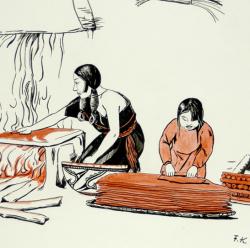 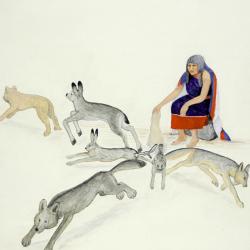 Grandmother Spider shakes sand out of her moccasins 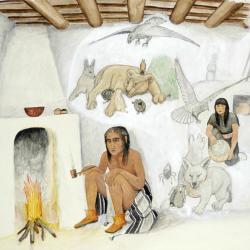 Tatay sits by the fire and muses