Internationally collected and admired worldwide as a sculptor, painter, and teacher, Allan Houser (1914-1994) is back in the Santa Fe spotlight in a major way this summer on the 100th anniversary of his birth. Five monumental artworks by the famed Chiricahua Apache sculptor will be displayed in the exhibit Footprints: The Inspiration and Influence of Allan Houser at the Museum of Indian Arts and Culture (MIAC), accompanied by an assortment of life-size and monumental sculptures by notable artists who either studied with Houser at IAIA, worked with him at his studio, and/or were influenced by him.

The largest of the five Houser sculptures in the show is Homeward Bound (1989), a massive bronze scene measuring 87.5 inches high by 153 inches wide by 23 inches deep. It depicts a young Navajo woman herding three sheep home across a bridge to safety. Homeward Bound is part of a limited edition of six; the sculpture is also held in the collections of the University of Oklahoma and of Heifer International, a company that gifts live animals to impoverished communities around the world. The other four sculptures are the abstracted Affection and the figurative As Long as the Waters Flow, He Will Be Home Soon, and Ready to Dance. These join two other large Houser sculptures previously on loan to the museum from Allan Houser Inc., for a total of seven Houser pieces on display, all imbued with the harmony and beauty for which the artist is known.

Surrounding the Houser sculptures on Milner Plaza will be a gathering of other monumental sculptures in bronze, marble, limestone, and/or steel from artists influenced by Houser, including such pieces as Allan Houser (2001), a 700-pound, life-size sculpture of Houser as an older man by Phillip Mangas Haozous; Santa Fe Table (1989), a 700-pound steel table with raised cutouts of Santa Fe iconography like coyotes by Bob Haozous; and People of the Red Tail Hawk, a 700-pound bronze by Doug Hyde featuring a Nez Perce boy, Iroquois warrior, Blackfoot chief, Buffalo dancer, Hopi maiden, and Omaha man, along with a bear and a Northwest coastal raven, considered the bringer of fire.

While various other Houser shows are being mounted to commemorate his centenary, MIAC director Della Warrior (Otoe/Missouria) conceived this show with the aim of emphasizing Houser’s legacy. "What we are trying to demonstrate is his legacy extends far beyond his own works because he influenced so many artists. We’re concentrating on the monumental sculpture, but he influenced hundreds of artists, including painters, to develop their own artistic style and become themselves as artists. To look at this array of artists from tribes throughout the nation is a profound statement about his ability to influence, generate, and excite students," says Warrior.

Adds show curator Dorothy Grandbois (Turtle Mountain Chippewa), "Most of the artist participants are IAIA students that he taught and then some worked with him in his studio. I think it’s the only show of Allan and his students in the same exhibit. These students studied with him and all became full-time working artists. It’s a historic exhibit that speaks volumes about his legacy."

Preparator Andrew John Cecil is installing the monumental sculptures for the show, which will be on display for 10 months from August 3, 2014 until May 31, 2015.

On August 3 from 1 PM to 4 PM there will be an opening exhibit with participating artists Phillip Mangas Haozous, Bob Haozous, Don Chunestudey, Oreland C. Joe, Estella Loretto, Cliff Fragua, and Rollie Grandbois expected to attend, along with performances by Native dance groups.

Anticipates Warrior of the dramatic, all-outdoors exhibition, "It’s going to be awesome to see all these sculptures all around Milner Plaza for 10 months!" 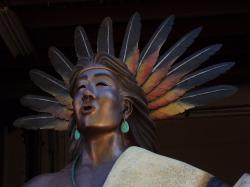 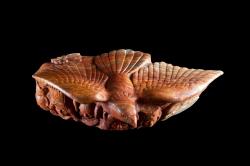 People of the Red-Tailed Hawk