Fire Season is the fourth and final group exhibition in the Focus on Photography series, a year-long examination of the influential and ever-changing medium of photography. The exhibition opens Friday, May 1 at 5.30 p.m. with a free public reception and runs through July 26, 2015.

This group show of fifteen photographs includes work by Jane Fulton Alt, Patricia Galagan, Philip Metcalf, Larry Schwarm, and Greg Mac Gregor, that explores the dynamic element of fire, from controlled burns and active wildfires, to their aftermath of devastation and renewal. The show coincides with New Mexico’s fire season, which in recent years has produced two of the largest wildfires in the state’s recorded history.

Featured are two Santa Feans who have photographed extensively in the Jemez Mountains in the aftermath of the Las Conchas fire, which burned more than 150,000 acres in 2011. Patricia Galagan and Philip Metcalf approach the site as both evidence of an unprecedented local fire and an extraordinary visual terrain, returning for numerous visits in 2012 and 2013. Working in black-and-white with infrared film, Metcalf’s series, Fire Ghosts, captures the skeletal remains of a once-verdant forest—stark vistas of blackened old-growth trees and ashen ground. In Fire Frazzle we see a portrait of a towering individual tree destroyed by fire. Despite the sobering subject matter, Metcalf finds unexpected beauty in the burned trees. Galagan’s series The Green Fuse also addresses the inescapable destruction of the fire-ravaged landscape but emphasizes fire’s role in the regeneration of the forest ecosystem. The pieces in the show range from Tiny River of Green, in which the artist highlights a small area of regrowth among the dead trees, to August’s Garden, in which a massive fallen trunk is cradled in the grasses and wildflowers nourished by the burn. The images, Galagan writes, “remind us that the most essential task of a forest in our hotter, drier world is to survive.”

Jane Fulton Alt’s series The Burn began in an eventful year in which her first grandchild was born, her sister was diagnosed with cancer, and she witnessed a controlled prairie fire in the area bordering Chicago. Struck by the expressive possibilities of the fire at this turbulent time in her life, Alt spent the next six years working amidst the heat and smoke of controlled burns in Lake Forest, Illinois, attempting to capture “the ephemeral moment when life and death are not opposed but are harmonized as a single process….” In Burn No. 93 and Burn No. 55, she uses the subtleties of shifting smoke as visual manifestations of her own disorientation, lucidity, and emotional fluidity, using the external landscapes to reflect inner states.

Larry Schwarm, a native of Kansas now based in Wichita, has been photographing prairie fires in vivid color for several decades. Printed large and often appearing as fields of intense color, Schwarm’s pictures convey the scale and force of prairie fires, along with their terrible beauty. The most successful images, he says, “look the way it felt to be there,” evoking the intense sight, smell, temperature, and sound of a wildfire. His image Prairie Fire Near Cottonwood Falls, Kansas, vividly suggests the velocity, heat, and light of a conflagration sweeping across the plains, while Smoke Passage, Chase County, Kansas, shows a towering expanse of smoke ascending apocalyptically into the sky, illuminated by the red glow of fire.

Finally, Santa Fe landscape photographer Greg Mac Gregor sums up in one image the challenges of having human-built environments adjacent to forested areas. His black-and-white view of New Mexico’s Rail Runner train shows it stopped at the Santa Fe depot with a colossal column of roiling smoke rising behind from the Tres Lagunas fire of 2013.

High resolution images are available on the Museum of New Mexico Media Center here. [link to be provided]

In honor of National Wildfire Preparedness weekend, the museum extends a special welcome to firefighters and their families on Sunday, May 3. View the exhibition Fire Season and join us for a free lecture in the St. Francis Auditorium at 2:00 p.m., when Dr. Alexander Evans, Research Director of the Forest Guild, will discuss “fire adapted communities,” part of national effort to reduce vulnerability of communities where fire is common or likely. 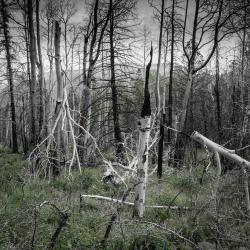 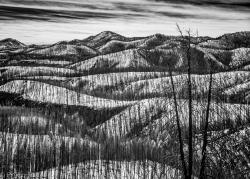 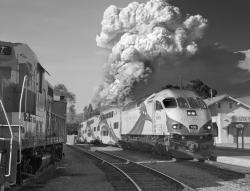 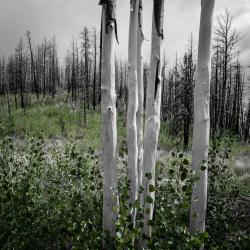 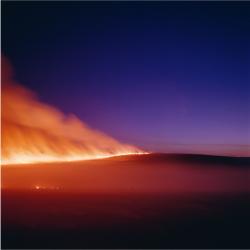