Longtime Santa Fe resident Gay Block’s photography is internationally recognized for its fearless exploration of personal identity issues—gender, class, religion, familial relationships, and sexual orientation. A survey of more than forty of her works from 1975 to 2012 in To Feel Less Alone: Gay Block, A Portrait, opens Friday, May 1, 2015 at the New Mexico Museum of Art. The exhibition runs through July 26, 2015.

“Gay Block has always used the camera as a tool for understanding life,” said the museum’s curator of photography Katherine Ware. “She falls in love with the individuals she photographs and wants us to fall in love with them, too.”

Block was initially inspired by a 1972 exhibition of photographs by Diane Arbus and studied photography at Rice University with Geoff Winningham and others in the early 1970s. Her first major project, represented by several examples in the show, was to make black-and-white portraits of the affluent Jewish families who attended her Temple in Houston. The resulting pictures reflect her deep curiosity about the people and families around her.

“Portraiture for me has always been so personal. I never felt like I was out to advance the medium. It wasn’t about photography for me; it’s about the people,” Block has said.

Camp Girls is a group of prints from 1981 inspired by Block and her daughter’s experiences as Camp Pinecliffe campers in Maine. The series captures the freedom of a summer spent outdoors and the emerging personalities of these adolescent girls. Twenty-five years later, Block was inspired to photograph the girls again, wondering what they had made of their lives. In this later body of work, Block photographs each of them in color, then juxtaposes the early black-and-white portraits with the contemporary color portraits, inviting us to compare them. Other portrait pairs from throughout Block’s career are also on view in the exhibition.

Also from 1981 are portraits from the series Miami, South Beach, a study of the elderly Jewish residents of southern Florida. Perhaps struck by their joyous attitude toward life in retirement, and undoubtedly inspired by the colorful deco buildings of South Beach, Block photographed them in color. Block’s image Untitled (Two Friends) shows two ladies arm-in-arm, decked out in sunhats and nose protectors.

Block explored another aspect of her Jewish heritage in the renowned series Rescuers: Portraits of Moral Courage in the Holocaust, for which she and Malka Drucker interviewed more than one hundred Christians who risked their lives to rescue Jews in Europe during World War II. Three years and four continents later, they created a collective portrait of these rescuers in pictures and interviews that became a traveling exhibition and book. Hoping to connect audiences with these ordinary but courageous people, Block photographs them quietly in their home environments.

The artist has often used photography to examine uncomfortable subjects. Her own complicated relationship with her mother is the subject of the long-term project Bertha Alyce: Mother exPosed. Included in the exhibition is the diptych What Was Mother’s is Now Mine, which combines a picture of Bertha Alyce posing with her prized possessions in Houston and a picture of the artist with the same objects at her own home in Santa Fe after her mother’s death.

To Feel Less Alone: Gay Block, A Portrait opens simultaneously with another photography exhibition, Fire Season, and the interactive learning space, Photo Lab #4 on Friday, May 1, 2015 at 5.30 p.m. with a free to the public opening. 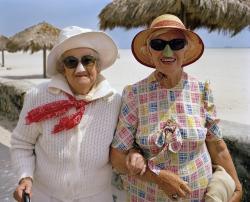 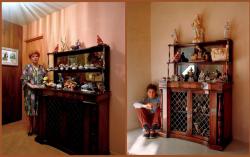 Trey in his bedroom 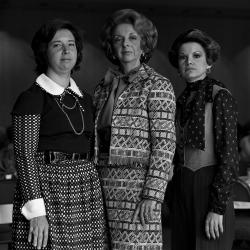 Jane Elyse and her daughters, Lynn and Joan, Houston