Material Matters: Selections from the Joann and Gifford Phillips Gift


Material Matters: Selections from the Joann and Gifford Phillips Gift opens at the New Mexico Museum of Art on Friday, April 17, 2015 and runs through August 16, 2015. The twenty-eight works on view are artists working in California and New Mexico who took an experimental approach to abstraction through materials and process.

The curators at the New Mexico Museum of Art have spent the last few years focused on the museum’s collection—mining materials for exhibitions, addressing conservation issues, and setting priorities for additions to the permanent collection. This has reaffirmed the wealth of materials available in the Museum of Art collection, such as this impressive gift made by Joann and Gifford Philips to the Museum of Art in 1980. The first gift of sixteen paintings, all by California-based artists, were produced from the 1950s to the 1970s and are being shown alongside works created slightly later by artists working in New Mexico and were subsequent gifts to the museum by the Phillips.

Why these two periods in these two locations? Firstly, there is a shared affinity and a great deal of cross over between artists living and working in both California and in New Mexico. Secondly, and more significantly, the works selected for the exhibition illustrate time periods within which the artists in these regions were creating hybrid works that resisted regional preconceptions as they reinvigorated and expanded their respective art scenes.

Hybridization and experimentation with material and process are at the core of production for many of the works in this exhibition. The stereotype of the West as uninhibited and experimental rings true as artist in both states forged new ground and worked from alternative influences than their East coast counterparts. For example, when creating his untitled wall hanging from 1972, Edward Moses took inspiration from traditional Navajo weaving, and used tools from the building trade and industrial supplies.

The Phillips also collected works by select artists working in New Mexico during the 1980s and gifted them to the Museum of Art at a later date. Among them and included in Material Matters: Selections from The Joann and Gifford Phillips Gift are twelve works by Garo Antreasian, Ron Cooper, Allan Graham, Richard Hogan, and Eugene Newmann. For many reasons, both artistic and cultural, New Mexico, and Santa Fe in particular, have long attracted artists—one among them, a vital gallery scene. By the 80s there was a turn from the more traditional art of the Southwest toward experimental abstraction. Like the changes for California art and artists earlier in that century, the 80s saw a seismic shift in the arts in New Mexico and in Santa Fe in particular.

“It has been particularly exhilarating to spend time with these works in our collection. These were two extraordinarily innovative times for the arts in California and New Mexico and both eras are of particular interest to me,” says curator Merry Scully. “Artists were taking chances, redefining their media, breaking ground, and making works that would eventually reverberate nationally and internationally.”

Scully goes on to say that, “The redefinition of art included new visual means of expression, new materials, and new formats; like Max Cole and Allan McCollum’s radical approach to painting on canvas which is matched by Ron Cooper, Greg Card and Edward Moses’ experimentation with new and industrial material for artists. Tom Wudl and Jay McCafferty used process based methods, like painting through perforated newspaper and solar burning, to produce their heavily textured works on paper.”

Museum director Mary Kershaw said, “This exhibition has provided the museum the opportunity revisit the extraordinary generosity of Joann and Gifford Phillips by sharing some significant artworks with our visitors and at the same time to conserve significant artworks that utilized experimental materials and means of production.”

Material Matters: Selections from the Joann and Gifford Phillips Gift illuminates two evolutionary eras that took place in two western states’ art communities and the prescient collecting interests of the Phillips of the avant-garde in American art. 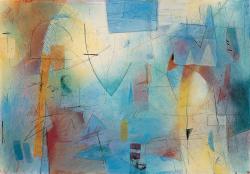 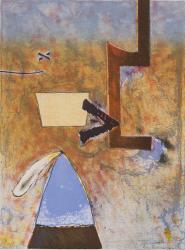 Figures With A Purple V 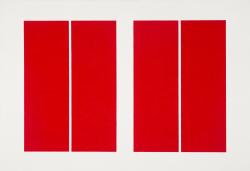 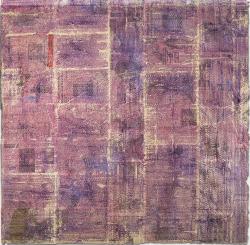