From the making of a classic Western to stories of remarkable women, Harvey Houses, Southwestern cuisine and the Llano Estacado, the Fray Angélico Chávez History Library’s Brainpower & Brownbags Lunch Lectures offer a wealth of learning. Organized by Librarian Tomas Jaehn, the monthly lectures are free and open to the public (and, yes, you can bring a lunch). Each lecture begins at noon in the Meem Community Room; enter through the museum’s Washington Avenue doors. Seating is limited.

Here are the lectures for the second half of 2015:

A Los Angeles-based writer and editor, Seydor is the author of The Authentic Death and Contentious Afterlife of Pat Garrett and Billy the Kid: The Untold Story of Peckinpah’s Last Western Film (Northwestern University Press, 2015).

(Download an image of Peckinpah at the 1981 Santa Fe Film Festival by clicking on "See and Download Related Photos, above left.)

Phil T. Archuletta is the CEO of P&M Signs in Mountainair and has been involved with creating historical markers since 1970. He serves on the board of the National Hispanic Cultural Center and wrote Traveling New Mexico: A Guide to the Historical and State Markers (Sunstone Press, 2004). Rosanne Roberts Archuletta is the principal of R.M. Roberts and Associates, a human resources consulting firm. With Phil, she wrote Women Marked for History, New Mexico Roadside Markers Honor Women Leaders (Sunstone Press, 2013).

Longtime journalist and communications lecturer at Texas A&M, Rice once worked as the Austin American-Statesman’s restaurant critic, where he reviewed more than 1,000 meals, including one with a $900 tab in Paris.

Wednesday, December 2, Lesley Poling-Kempes on “Ladies of the Canyons: Remarkable Women of the Southwest”

Poling-Kempes, an Abiquiu resident, has written numerous books about the Southwest, including Bone Horses, Ghost Ranch, and The Harvey Girls: Women Who Opened the West. Her most recent book is Ladies of the Canyons: A League of Extraordinary Women and Their Adventures in the American Southwest (University of Arizona Press, 2015). 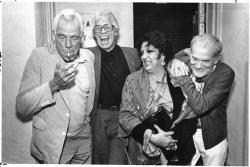