Billy the Kid, Kit Carson, Lucien Maxwell, the railroad, Pueblo Indians and more are among the topics covered in the next set of the Fray Angélico Chávez History Library’s Brainpower & Brownbags Lunch Lectures. Organized by Librarian Tomas Jaehn, the monthly lectures are free, and you’re welcome to bring a lunch. Each lecture begins at noon in the Meem Community Room; enter through the museum’s Washington Avenue doors. Seating is limited. Phone number for publication: 505-476-5200.

Here are the lectures for the first half of 2016:

Wednesday, January 13, Francois-Marie Patorni on “The French in New Mexico”

Patorni, a French native and Santa Fe resident, is the author of New Mexico: The French since the 1500s, which explores 500 years of French, French-Canadian and other French-speaking people in the Land of Enchantment. His website is http://newmexicofrenchhistory.com/.

Frost, a Santa Fe resident, is professor emeritus of American history and Native American studies at Colgate University. He wrote The Railroad and Pueblo Indians: The Impact of the Atchison, Topeka and Santa Fe on the Pueblos of the Rio Grande, 1880–1930 (University of Utah Press, 2015).

Cangemi is a doctoral student at New York’s Binghamton University, studying diplomatic history and U.S. foreign relations with Latin America. His dissertation is tentatively titled, “`The Church Does Not Propose a Peace by Force’: The Holy See and U.S.–Guatemalan Relations, 1976–1988.”

Thursday, April 21, Chares W. Daniels on “Justice is Coming: An Illustrated History of the Justice System in the Territory and State of New Mexico”

A courtroom lawyer of 38 years before his 2007 appointment to the state Supreme Court, Daniels has frequently taught at the UNM School of Law. He will serve as the court’s chief justice in 2016–2018.

Zimmer, a longtime Cimarron, NM, resident, is the author of numerous historical books, including People of the Cimarron Country (Eagle Trail Press, 2012). He was formerly director of museums at Philmont Scout Ranch.

Aragon, an Albuquerque historian with a memorabilia collection of Kid-related materials, is the author of Billy the Kid Meets his Ghost (Event Horizon Press, 2015) and an Arcadia photo book on Lincoln, NM. He wrote the foreword to the reprint of The Real Billy the Kid by former Territorial Governor Miguel Antonio Otero. 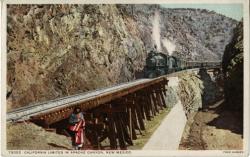