El Palacio magazine, the country’s oldest museum magazine at 102 and counting, is pleased to announce the hire of Candace Walsh as Editor in Chief. El Palacio reflects the work of New Mexico’s four state museums in Santa Fe; its eight New Mexico Historic Sites; and its singular Office of Archaeological Studies and is considered the source for knowledge about the art, history and culture of the Southwest.

The magazine’s publisher, Shelley Thompson said, “Candace’s particular set of skills and natural abilities will position El Palacio to maintain our high standards of excellence and to move solidly and strategically forward in a challenging business climate.”

Walsh contributes over a decade of direct, hands-on experience in fast-paced magazine environments. Her thirteen years as a New Mexico resident and four years as the Managing Editor of New Mexico Magazine have endowed her with a deep and nuanced knowledge of the state’s arts, cultural, and historical assets.

“The magazine’s longevity and legacy status as a trusted sage about all things DCA have made it indispensable to its readers,” said Walsh, “and I look forward to continuing and growing this tradition as Editor in Chief. El Palacio is deservedly award-winning, and it will be an honor to work with the talented Museum Resources staff, and the magazine’s many renowned contributors.”

Thompson continued, “Candace is an award-winning editor and writer. She is an industry leader in exploring new directions in publishing and her demonstrated abilities in digital publishing and promotion, including extensive and expert use of social media to sustain and grow audiences, will assure El Palacio’s success for the next 100 years. Welcome, Candace!”

Candace Walsh has worked on staff at Condé Nast International, Mothering Magazine, and most recently as the managing editor of New Mexico Magazine. Her writing has appeared in numerous national and local publications, including Newsday, Travel + Leisure, Sunset, New York magazine, El Palacio magazine, and New Mexico Magazine. She is the author of Licking the Spoon: A Memoir of Food, Family, and Identity (Seal Press 2012), a 2013 New Mexico – Arizona Book Awards winner. She edited two Seal Press anthologies, and her essays have been published in several anthologies and publications, including Here Come the Brides, on Slate.com, The Huffington Post, and in the Santa Fe Reporter. She lives in Santa Fe with her wife, Laura M. André, their two children, and two dogs.

ABOUT THE NEW MEXICO DEPARTMENT OF CULTURAL AFFAIRS 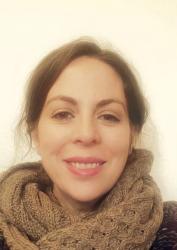