Pancho Villa and the U.S. Army: A Training Ground for World War I


On March 9, 1916, Mexican revolutionist Pancho Villa and his army of 1,500 guerillas attacked Columbus, NM, killing 19 people and leaving the town in flames. President Wilson ordered General John J. (Black Jack) Pershing to lead 6,000 American troops (including a young lieutenant named George S. Patton Jr.) into Mexico to capture Villa. For nearly two years, they pursued him. Villa was still free when the “Punitive Expedition” ended, but Pershing, Patton and their men had learned important tactics that soon served them in another war far from home.

To commemorate this year’s 100th anniversary of the Columbus attack, the New Mexico History Museum hosts a special lecture by noted author and photographer Jeff Lowdermilk and Helen Patton, granddaughter of General Patton. “Pancho Villa and the U.S. Army: A Training Ground for World War I” is at 2 pm on Sunday, March 6, in the museum auditorium. Seating is limited. The lecture is free with admission; Sundays are free to NM residents.

Why did Villa attack Columbus? What new technologies did U.S. troops employ to look for him? Where did the nickname “doughboys” come from? Hear about that—and more, including a prepared statement that Helen Patton will read from Sandra Pershing, widow of the general’s grandson, Colonel John Warren Pershing.

Jeff Lowdermilk is a writer, photographer, lecturer, and student of World Wars I and II. He has traveled extensively throughout Europe, documenting the path detailed in his grandfather’s World War I diary and resulting in the book, Honoring the Doughboys: Following My Grandfather’s World War I Diary. He also wrote Saluting America’s World War I Heroes, a historical and dedicatory piece centered on his experiences at the 87th anniversary of the Armistice. His photographs have been displayed at the National World War I Museum in Kansas City, Missouri, and also were featured in the 2010 Annual Report of the American Battle Monuments Commission. A passionate and creative storyteller, Lowdermilk leads presentations and lectures around the world that weave together his rich imagery, personal anecdotes, and meticulous historical research. He lives in Santa Fe with his wife, Annie. For more information on his work and presentations, visit www.jefflowdermilk.com.

Helen Patton, a native of Hamilton, Mass., who lives in Reims, France, is the granddaughter of General George S. Patton Jr. and the daughter of Major General George S. Patton IV, the decorated Vietnam War hero. She is the founder of the Patton Foundation in the United States and the Patton Stiftung Sustainable Trust in Saarbrucken, Germany. She works tirelessly to keep the memory of the World War II generation alive and helps soldiers, veterans, and their families. For more information about her work, visit www.thepattonfoundation.org. 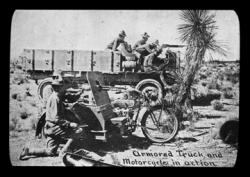