Into the Future: Culture Power in Native American Art

Featuring nearly 100 objects by more than fifty artists from the museum’s collections as well as others borrowed from collectors and artists, the work on view in Into the Future will be in such various media as traditional clothing and jewelry, pottery and weaving, photography and video, through to comics, and on into cyberspace.

The free to the public opening for Into the Future: Culture Power in Native American Art at the Museum of Indian Arts and Culture is on July 17, 2016 from 1 to 4 pm and the show runs through October 22, 2017.

“Culture Power”, in the exhibition’s title, is defined by exhibition curator Valerie Verzuh, as the unique power bestowed upon objects by a culture’s stories, traditions, and emotions – objects which define ourselves, our communities, and the world around us – and, in turn, determine how we interpret and understand others.

When Native artists reinterpret popular Western imagery through the lens of these culture stories the collision of meanings provides a springboard for often pointed commentary upon issues of identity, culture, and history. And, says Verzuh, these reimagined images elicit intense emotions, “As power resides both in the mind of the viewer and in the objects themselves. Having the authority to control objects and their meanings correlates with the power to define and control personal and cultural identities.”

Using humor, as a reaction to otherwise serious issues, serves an important role in tribal cultures, for instance the widespread Trickster tradition and Pueblo clown societies. In Into the Future we see work by artists who find the comic book aesthetic expresses perfectly their message. Turning the mainstream narrative on its head and re-interpreting it through the Native cultural lens, Larry McNeil’s “Tonto” in Tlingit-Nisga’a is transformed from a “dimwitted sidekick to the hero,” Jonathan Loretto’s, Star War Figure with Ray Gun is a Cochiti Storyteller “Bobble Head” figure, and Theo Tso developed Captain Paiute the Indigenous Avenger of the Southwest, “…after noticing that there weren’t any comics that were written, drawn or even created by Native Americans!"

Ecological destruction and the Native’s belief of the interconnectedness of all living things is the subject of some artists’ work, like Frank Buffalo Hyde’s, Buffalo Fields Forever: To Infinity and Beyond, on the decimation of the buffalo instilling his unique brand of biting humor. Others illuminate the depredations, revolt, and reoccupation of the Spanish expeditions, like Jason Garcia’s Tewa Tales of Suspense, Fred Kabotie’s The 1680 Pueblo Revolt at Hopi, and Diego Romero’s Don’t Shoot Diego and Siege of Santa Fe.

Into the Future: Culture Power in Native American Art celebrates the vitality of contemporary Native North American communities. So when you see a “Native” Sponge Bob Square Pants living life out loud on the ocean’s bottom, Pac Man chomping through an imagined game world, and Curious George’s adventures in the big city, know that by redefining mainstream objects and their associated meanings, Native artists assure that their culture is both integrated into that of the world at large and proudly separate from it. 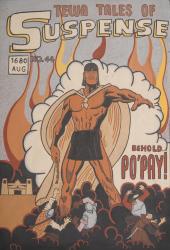 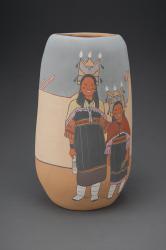 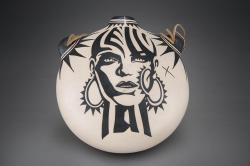 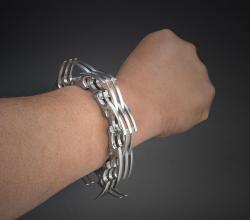 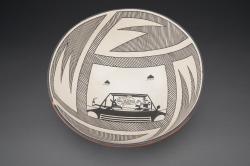