In conjunction with the museum’s Lowriders, Hoppers and Hot Rods exhibit, writer and cultural activist Denise Chávez takes a look at the celebratory fronterizo lowrider culture in Southern New Mexico with photo documentation by international photographer Daniel Zolinsky.  Chávez and Zolinsky will address the differences, similarities, and resonant traditions and customs of southern New Mexico, the sometimes forgotten, always highly-charged world within a world.

Denise Chávez was born, raised and still lives in Las Cruces, New Mexico, 42 miles from the México Border. If she didn’t live in Cruces, she would live in Española, New Mexico, “Low-Rider Capital of the World,” where she once lived and taught at Northern New Mexico Community College. Chávez’s most recent novel, The King and Queen of Comezón, won the International Latino Book Award in Fiction as well as the NM-AZ award in Fiction. Other books include Loving Pedro Infante, Face of An Angel and A Taco Testimony: Meditations on Family, Food and Culture, among others. Daniel Zolinsky was born in Paris, France to Franco/Russian parents and learned to take photographs when he arrived in the U.S. at age ten. He considers himself a “Fricano”—A French Chicano. Zolinsky has exhibited his photos throughout the U.S. and Europe and lives in Las Cruces with his wife, author, Denise Chávez.

Lowriders, Hoppers and Hot Rods seeks to elevate that culture beyond its common stigmas and stereotypes to celebrate skilled craftsmanship and commitment to family and community. Car clubs regularly reach out to local youths, giving them gears-and-wrenches reasons to drive a straight road. We’re opening a door to people of all cultures to mingle, learn and appreciate what it means to engineer a proud ride and hit the road, low, slow and in high style.

For a high resolution image of Denise Chavez from the Media Center click here. 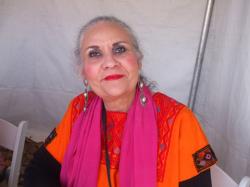