FOR IMMEDIATE RELEASE—September 27, 2016 (Santa Fe, NM): In conjunction with the exhibit, Lowriders, Hoppers and Hot Rods: Car Culture of Northern New Mexico, lowriter, poet and University of New Mexico professor Levi Romero invites poets Jessica Helen Lopez and Damien Flores to share the stage in a reading and presentation that celebrates New Mexico cultura, traditions, and down-and-low groovy lowcura on Sunday, October 16, 2016 at 2pm at the New Mexico History Museum, free to the public. Take a little trip, take a little trip... on a Sunday afternoon poetry cruise that will make you feel as if you’re riding in a lowered, chain steering-wheeled bomba slithering through the blue dotted night along Riverside Drive, Española.

Levi Romero is a lowriter from the Embudo Valley of northern New Mexico. He is an Assistant Professor in the Chicana and Chicano Studies department at the University of New Mexico and Director of the New Mexico Cultural Landscapes Certificate Program. He was awarded the post of New Mexico Centennial Poet in 2012. His latest book is Sagrado: A Photopoetics Across the Chicano Homeland. His two collections of poetry are A Poetry of Remembrance: New and Rejected Works and In the Gathering of Silence. His essay, Lowcura: A Virtual Cruise through an American Sub-cultural Tradition, was part of an exhibit by the Smithsonian Institute and will be published in the forthcoming, The Practice of Counter Culture. Museum of New Mexico Press, Spring 2017. His poem, Wheels, appears in another book, ¡Órale! Lowrider: Custom Made in New Mexico, Museum of New Mexico Press, Fall 2016.

Jessica Helen Lopez was the former City of Albuquerque Poet Laureate and the Poet-In-Residence for the Albuquerque Museum of Art and History from 2014 - 2016. She has also been a featured writer for 30 Poets in their 30’s by MUZZLE and named one of the "10 Up and Coming Lantinx Poets You Need to Know" by international digital publisher and agency, Remezcla.  Lopez is a nationally recognized award-winning slam poet, and holds the title of 2012 and 2014 Women of the World City of ABQ Champion. She is a member of the Macondo Foundation. Founded by Sandra Cisneros, it is an association of socially engaged writers united to advance creativity, foster generosity, and honor community. Her first collection of poetry, Always Messing With Them Boys (West End Press, 2011) made the Southwest Book of the Year reading list and was also awarded the Zia Book Award presented by NM Women Press. Her second collection of poetry is published by Swimming with Elephants Publication (2014). Her third collection, The Language of Bleeding: Poems for the International Poetry Festival, Nicaragua (SWEP) is a limited release in honor of her ambassadorial visit to Granada, Nicaragua.

She is the founder of La Palabra – The Word is a Woman collective created for and by women and gender-identified women. Lopez is a Ted Talk speaker alumni and her talk is titled, Spoken Word Poetry that Tells HERstory. She is a book reviewer for World Literature Today Magazine.

Damien Flores hails from Albuquerque, New Mexico. He received a BA in English and Chicano Studies from the University of New Mexico in 2009 and was recipient of the 2008 Lena Todd Award for creative non-fiction from the UNM English Department. He was named "Poet of the Year" in 2007 & 2008 by the NM Hispano Entertainer’s Association.

Flores is best known as a member of the ABQ Poetry Slam Team as well as the two-time National Champion UNM Loboslam teams. He organized the College Unions Poetry Slam in 2008 and is also a four-time ABQSlams City Champion.

His published works include A Novena of Mud and El Cuento de Juana Henrieta, released by Destructible Heart and Culture Lab Press. His work has appeared in Button Poetry, Bomb Magazine, The Daily Lobo, Duke City Fix, and The Underground Guide to Albuquerque. Flores has also been anthologized in Malpais Review, De Veras: Young Voices From the National Hispanic Cultural Center, Earthships: A New Mecca Poetry Anthology, The 2006 National Poetry Slam Anthology, and A Bigger Boat: The Unlikely Success of the Albuquerque Poetry Slam Scene.

Damien Flores is currently an instructor at The University of New Mexico and the Native American Community Academy in Albuquerque. He also hosts the Spoken Word Hour on 89.9 KUNM-FM.

Phone number for publication: 505-476-5200 For more information about the museum, log onto www.nmhistorymuseum.org. 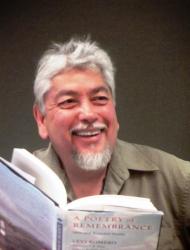