The Museum of International Folk Art Presents No Idle Hands: The Myths & Meanings of Tramp Art


For Immediate Release: October 17, 2016 (Santa Fe, NM) The Museum of International Folk Art presents No Idle Hands: The Myths & Meanings of Tramp Art, the first large-scale museum exhibition dedicated to tramp art since 1975. The exhibition will present more than 150 examples of tramp art, concentrating on works from the United States, with additional examples from France, Germany, Switzerland, Scandinavia, Canada, Mexico and Brazil to demonstrate the far reach this art form has had. Additionally, the show will analyze and dismantle the myths and misperceptions about tramp art, particularly as they relate to assumptions related to class, quality, and the anonymity of the makers. No Idle Hands opens on March 12, 2017 and remains on display through September 16, 2018.

Tramp art describes a particular type of chip-carved woodwork that was practiced in Europe and the United States between the 1870s and 1940s, making use of discarded cigar boxes or crates that were then notch-carved along the edges and layered. Objects made were primarily boxes and frames, but other household objects such as small private altars, crosses, medicine cabinets, wall pockets, clock cases, plant stands, and even furniture can be found.

"Tramp art’s place in art history has been troublesome. It has had detractors—people who regard it as ’the ugly duckling’ of folk art—but also numerous champions," said Laura Addison, Curator of North American & European Folk Art at the Museum of International Folk Art, and the show’s curator. "This exhibition will erase any doubts about the quality and craftsmanship of the work and situate tramp art as a practice at the crossroads of cultural transformation at the turn of the 20th century," she said. Addison also pointed out that by juxtaposing historic pieces with those by contemporary artists working in the tramp art style, the exhibition frames this art form as an ongoing tradition that continues to capture the public’s imagination—myths and all.

"The ingenious objects in the Tramp Art exhibition use recycled or repurposed wood, and highlight a moment in time a century ago when artisans, many of them immigrants to the US, created a new variety of folk art," said Khristaan D. Villela, Director of the Museum of International Folk Art. "They are a testament to the ability of untrained artists to produce objects of immense beauty and complexity," he said.

For many years, tramp art was believed to have been made by itinerants and hobos, thus its name. It has been demonstrated, however, that this belief, first put in print by Frances Lichten in a 1959 Pennsylvania Folklife article, is erroneous. Nonetheless, the name "tramp art" has remained the only terminology used for this practice, and the paucity of scholarly studies to dispel the mistaken notions about tramp art have allowed the myths to persist.

Whittling objects such as wood chains and ball-in-cage whimsies was a common pastime, including among railriding "hobos," and some examples of tramp art were likely by the hand of itinerant laborers or artisans. However, this style of carving was more commonly the practice of family men and blue-collar factory workers making functional domestic objects or gifts for the women in their lives. Efforts have been made in recent years to identify makers by name and unearth their biographies; these personal narratives illustrate a very different story of the makers of tramp art. As these makers and their stories come to light, it has become obvious that home and family are central to an understanding of the practice of tramp art.

No Idle Hands will present tramp art objects according to four primary areas: Introduction/historical context, home & nation, frames & boxes and devotional objects. Works in the exhibition will come from the Museum of International Folk Art permanent collection as well as loans from a number of private and museum collections across the country. An exhibition publication will accompany the exhibition, with essays by Laura Addison, Curator of North American & European Folk Art, Museum of International Folk Art; Leslie Umberger, a curator in the area of folk art and self-taught art at the Smithsonian American Art Museum; and Eric Zafran, a retired curator of European art, most recently at the Wadsworth Atheneum. 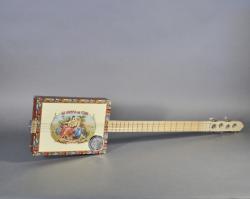 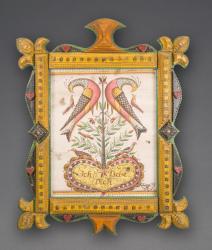 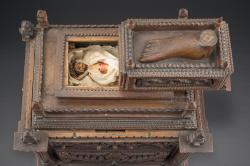 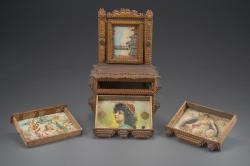 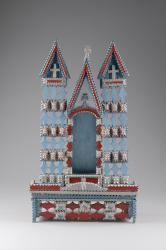 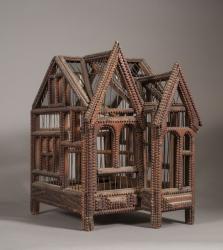 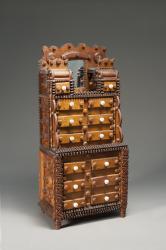 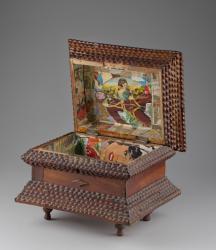