FOR IMMEDIATE RELEASE: Feb 10, 2017 (Santa Fe, NM)—The Press at the Palace of the Governors is pleased to host renowned letterpress printer, Amos Paul Kennedy Jr., at the New Mexico History Museum. On Friday, March 3, the museum will host an artist’s talk and screen a segment of the 2008 film, Proceed And Be Bold!, a documentary following the life and work of Kennedy and his socially and politically charged works of art. Following the event, attendees will have the opportunity to purchase his hand-printed and much sought-after posters. The event will take place at 6:00pm in the museum’s auditorium; attendance is free and open to the public. A “Cash and Carry” sale of Kennedy’s hand-printed posters will be held in the Meem Room of the New Mexico History Museum on Saturday, March 4 from 10 am - 4pm. The sale is free and open to the public. In addition, an exhibition of Kennedy’s broadsides from his Rosa Parks commemorative series will be displayed in the museum’s lobby beginning February 14 and continuing through June 4, 2017. 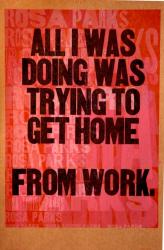