For Immediate Release: May 31, 2017 (Albuquerque, NM) -  Earth’s earliest primates dwelled in treetops, not on the ground, according to an analysis of a 62-million-year-old partial skeleton discovered in New Mexico — the oldest-known primate skeleton.

The study shows that Torrejonia, a small mammal from an extinct group of primates called plesiadapiforms, had skeletal features adapted to living in trees, such as flexible joints for climbing and clinging to branches. Previously, researchers had proposed that plesiadapiforms in Palaechthonidae, the family to which Torrejonia belongs, were terrestrial based on details from cranial and dental fossils consistent with animals that nose about on the ground for insects.

“This is the oldest partial skeleton of a plesiadapiform, and it shows  that they undoubtedly lived in trees,” said lead author Stephen Chester, an assistant professor at Brooklyn College, City University of New York, and curatorial affiliate of Vertebrate Paleontology at the Yale Peabody Museum, who began this collaborative research while at Yale University studying for his Ph.D. “We now have anatomical evidence from the shoulder, elbow, hip, knee, and ankle joints that allows us to assess where these animals lived in a way that was impossible when we only had their teeth and jaws.”

The study, published in the May 31 online edition of Royal Society Open Science, supports the hypothesis that plesiadapiforms, which first appear in the fossil record shortly after the extinction of non-avian dinosaurs, were the earliest primates. The researchers also contend that the new data provide additional evidence that all of the geologically oldest primates known from skeletal remains, encompassing several species, were arboreal.

The partial skeleton consists of over 20 separate bones, including parts of the cranium, jaws, teeth, and portions of the upper and lower limbs. The presence of associated teeth allowed Williamson, a co-author of the study, to identify the specimen as Torrejonia because the taxonomy of extinct mammals is based mostly on dental traits, said Eric Sargis, Professor of Anthropology at Yale University, and co-author of the study.

“To find a skeleton like this, even though it appears a little scrappy, is an exciting discovery that brings a lot of new data to bear on the study of the origin and early evolution of primates,” said Sargis, a curator of Vertebrate Paleontology and Vertebrate Zoology at Yale’s Peabody Museum of Natural History, where the partial skeleton was molded and casted for further study.

Palaechthonids, and other plesiadapiforms, had outward-facing eyes and relied on smell more than living primates do today — details suggesting that plesiadapiforms are transitional between other mammals and modern primates, Sargis said.

The paper’s other co-authors are Jonathan Bloch of the Florida Museum of Natural History at the University of Florida and Mary Silcox of the Department of Anthropology at the University of Toronto Scarborough.  The research was supported in part by grants from the National Science Foundation. 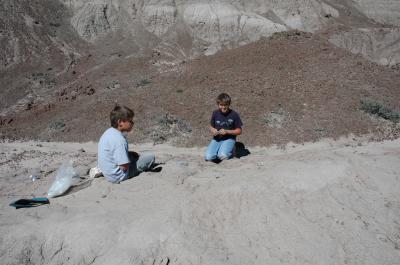 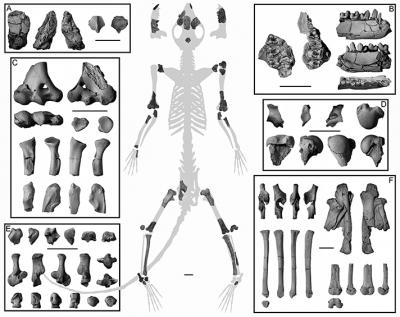 A new analysis of this 62-million-year-old partial skeleton of Torrejonia, a small mammal from an extinct group of primates called plesiadapiforms, had skeletal features adapted for living in trees.

The skeleton was Torrejon Fossil Fauna Area, a remote area in northwestern New Mexico, by Thomas Williamson, curator of paleontology at the New Mexico Museum of Natural History & Science.