Challah Rising in the Desert: The Jews of New Mexico


Challah Rising in the Desert: The Jews of New Mexico Sneak Preview at Museums

(Santa Fe, NM) - Challah Rising in the Desert: The Jews of New Mexico will hold special sneak previews followed by Q & A’s with Director Isaac Artenstein and Producer Paula Amar Schwartz at the New Mexico Museum of Natural History and Science Saturday June 24th at 7PM and on June 25th at 2PM at the New Mexico History Museum at the Palace of Governors in Santa Fe.  These special screenings will celebrate participants of this feature documentary and raise funds for the creation of an archive based on over 50 hours of recorded video to be housed with the New Mexico Jewish Historical Society.

Challah Rising in the Desert celebrates the history and people of New Mexico’s unique Jewish community.  Braided Challah bread represents five waves of settlement of New Mexico’s Jewish community including Conversos escaping the Spanish Inquisition 400 years ago, Jewish pioneers of the Santa Fe Trail in the 1800s, scientists of the 1940s at Los Alamos and the counterculture of the 1960s.  Challah Rising in the Desert is a moving tapestry of the Jewish experience woven into New Mexico’s unique history and landscape.

The film crew traveled throughout the state to interview over 40 New Mexicans including community leaders, historians, as well as descendants of early colonial and pioneer Jews.  As stories unveil, we learn about the relationships of Jewish individuals and families to diverse groups in the region including Hispanos, Anglos, Native Americans and other European immigrants. The beauty of the state and its historical landmarks also highlight the complex and authentic mosaic of western life of this multicultural state --- where else can you see bakers making loaves of green chilé challah bread, and Jewish worshipers wearing prayer shawls with Navajo designs?

Artenstein Directed Ballad of an Unsung Hero which aired nationally on PBS and served as the basis for his feature film Break of Dawn. He produced A Day Without a Mexican and is currently working on the giant-screen project, El Camino Real de las Californias.

Paula Amar Schwartz is the past president of the New Mexico Jewish Historical Society and helped create its first landmark videography history of the state’s Jewish pioneers. Tickets $25 per person.  For more information, please visit https://www.challahrising.com/ 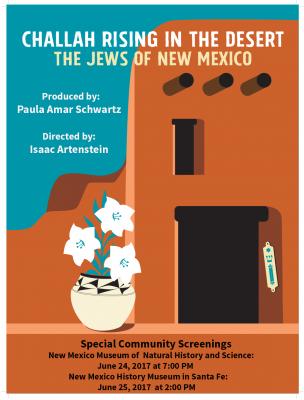