Santa Fe, NM-Called "the longest, crookedest, most arduous pack mule train in the history of America" by Colorado historian Leroy R. Hafen, the Old Spanish Trail is both one of the nation's least known trails but one of the most important pack mule trading trails in this region.

This exhibition traces the trail's history through illustrated wall panels and many artifacts. The trail (there were several) traces its origins to the indigenous people of the region who used them to hunt, relocate camps, and raid. When the Spanish signed a peace treaty with the Ute in 1670 they began to use these trails to cross between the territories of New Mexico and California.

The Old Spanish Trail was primarily a horse and mule pack route linking the village of Santa Fe to the Pueblo of Los Angeles (changed to San Gabriel by the Spanish). The trail evolved from a network of indigenous trade routes and exploratory routes that crossed the modern states of New Mexico, Colorado, Utah, Arizona, Nevada, and California.

Forged in 1829 by Hispanic traders, the Old Spanish Trail was the first successful Hispano trading effort to connect the Mexican frontier provinces of New Mexico and California. This overland trail linked the burgeoning ranch economy of the pacific communities to pastoral villages of the inter-mountain Southwest.

In the early 1800s, the Old Spanish Trail was a vital economic trade route that linked New Mexico and California. The trail symbolized much more than just a line on a map; it became a conduit for change throughout the vast, arid, expanse of the American Southwest. Its origin did not owe allegiance to nationalism for the trail was neither Spanish, Mexican, nor American.

The arrival of the Euro-Americans to the west irrevocably transformed the indigenous population. The horse gave the Ute, Shoshone, and Plains Indians unprecedented mobility and greater economic power. The ensuing economic trade along the Old Spanish Trail brought native people regular contact with the non-Indian world.

In time, the trail enabled an international network of commercial trade and social interaction between former Spanish/Mexican colonies and a fledgling American republic. The US acquisition of Mexican territory in 1848 - the consequence of war between neighbors - was perhaps one inevitable outcome of the multi-ethnic convergence that took place on the Old Spanish Trail.

Ultimately, Santa Fe became the center of a crucial commercial network consisting of the Santa Fe Trail to the east, the El Camino Real de Tierra Adentro to the south, and the Old Spanish Trail to the west.

Highlights of the exhibition include a violin and bow that were handmade in New Mexico, an 18th century black glass Baptismal Bottle made in Spain but found in Socorro, New Mexico, a 19th century man's Black Californio Suit (it is a formal outfit of an urban California gentleman designed to show wealth and social status), a rare New Mexican traveling retablo of Our Lady of Sorrows with leather case (it was intended for individual use, and sometimes taken along on journeys).

After Mexico ceded the Southwest to the US in 1848, the trail was modified in places and commercial goods were hauled by wagon. The Old Spanish Trail as a pack mule route was abandoned.

This is a traveling exhibition organized by the Fort Lewis College in Durango, Colorado and is funded in part by a National Park Service National Historic Trails Cost Share Grant. 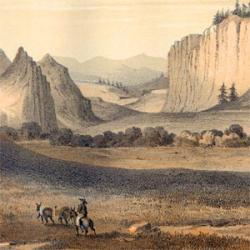