LAS CRUCES – New Mexico True is the state’s tourism theme. When it comes to agriculture, there aren’t many things in our state that are more New Mexico True than Debouillet sheep.

The breed originated in southeastern New Mexico, and the New Mexico Farm & Ranch Heritage Museum in Las Cruces has a new display that chronicles the development of this type of sheep. The Museum also has two Debouillet ewes among its livestock collection.

Debouillet sheep were developed by the late Amos Dee (A.D.) Jones of Roswell and Tatum. In 1920, Jones began crossing Ohio Delaine rams on his herd of 5,500 Rambouillet ewes. These ewes were an exceptional herd of commercial sheep. By selective breeding, Jones produced a long-stapled, fine-wooled sheep with a large, smooth body.  As a firm believer in this method of sheep improvement, he produced an ideal sheep by combining the length of the staple and character of the Delaine fleece with the large body of the Rambouillet.

After many years of highly selective breeding, Jones’ new breed of sheep became a reality known as the Debouillet. The name is derived from the names of the two component Merino breeds, “De” taken from the Delaine and “bouillet” from Rambouillet. The name was given to the breed by Jones’ wife, Portia, in 1947.

Today the Jones’ Ranch, in Tatum is operated by A.D. Jones’ son Ralls (Punch) and Ralls daughter, Deb, and son, Dirk. The Museum’s ewes came from their ranch.

Debouillet sheep are known for their bright, white wool. The fleece of the breed weighs between 10-18 pounds and measures from 3 to 5 inches in length. The wool is described as being deep and close crimped. “Crimp” refers to the bends in the individual wool fibers that give wool its “kinky” appearance. The finer the wool, the more crimps per inch.

The Debouillet breed is large and well-adapted to desert and semi-arid rangelands. Debouillet, along with the Rambouillet breed, account for the majority of sheep in New Mexico and Texas.

The Debouillet Sheep Breeders Association was organized in September of 1954 and was officially recognized by the U. S. Department of Agriculture in 1955.

The New Mexico Farm & Ranch Heritage Museum is located at 4100 Dripping Springs Road in Las Cruces. It covers 47 acres and visitors from all over the world have experienced New Mexico’s unique agricultural story, shared through demonstrations, special events, educational programs, and exhibits, including livestock. The Museum also has a greenhouse, gift shop, theater, galleries, and more. Hours are 9 a.m. to 5 p.m., Monday through Saturday, and noon to 5 p.m. on Sunday. Admission is $5 for adults, $4 for senior citizens, $3 for children ages 4 to 17, and $2 for active U.S. military members and veterans. Children 3 and under, and members of the Museum Friends receive free admission. The Museum is a division of the New Mexico Department of Cultural Affairs. 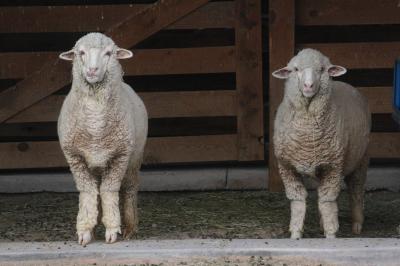