(Albuquerque, New Mexico) – With names like Albuquerque, Santa Fe and Taos, and a giant crater the size of the Valles Caldera, future maps of the planet Mars will contain a lot of names familiar to the people of New Mexico. Suggested by a member of the Mars Rover team based in New Mexico, the names are of cities and locales along the legendary El Camino Real de Tierra Adentro and are being used to name features visited by the Mars Exploration Rover Opportunity during an important phase of its mission.

“As part of mapping Mars’ surface, we name rocks and places investigated by the Opportunity rover to provide a convenient, easily remembered index. This helps in later more easily identifying and reviewing the data we are collecting along the planet’s traverses,” said Larry Crumpler, Ph.D., who has been part of the Mars Rover team for fifteen years, operating from his office inside the New Mexico Museum of Natural History and Science in Albuquerque.  Crumpler, a Research Curator Volcanology and Space Sciences and Associate Research Professor at the University of New Mexico, explained the naming ‘protocol’ was established by Spirit and Opportunity and has been in use since 2004.

To provide some consistency and constraint on naming, informal ‘naming themes’ are used to describe Mars geography which features craters, panoramas, investigation targets, and outcrops.  For example, all craters encountered are named after ships of exploration. Campaigns or particular outcrops or phases of the mission follow a theme.

“Recently we used names of stops along the transcontinental railroad,” said Crumpler. “Prior to that we used the names of the members of the Lewis and Clark Corp of Discovery.  Further back, Native American naming themes have been used, mountains and mountain climbers, French Independence Day, and others.”

“Mars looks so much like New Mexico, there is a lot of similarity to the terrain.  The Rover has been driving along the rim of the Endeavor Crater, a crater that in size and scale is close to the Valles Caldera in the Jemez Mountains,” Crumpler explained.  “New Mexican’s really understand the size of that Mars crater.”

Opportunity just began traverse down a valley, Perseverance Valley, that is the science centerpiece of the tenth extended mission plan.  The naming theme suggested by Crumpler and selected by the rover science team will be names from El Camino Real de Tierra Adentro, the name given by Spanish colonists for the "Royal Road of the Interior Land",  the 1600-mile -long trade route that ran from 1598 to 1882 between Mexico City on the South and San Juan Pueblo in New Mexico on the North.

“I convinced the science team to use names of places along Camino Real because to date, none of the naming themes come from Hispanic and Southwestern history and culture,” said Crumpler. “As a result, the names of some recent features being investigated by the rover, include, "Albuquerque", "Santa Fe", "Taos", and "Socorro".

“Next we’re looking at using two other familiar names along this theme, Bernalillo and La Bajada,” Crumpler said.

On Sunday, October 8, Opportunity captured the final image of the outcrop "Albuquerque - Bernalillo" and moved on to the outcrop "La Bajada".

Visitors to the New Mexico Museum of Natural History and Science can experience what it is like to steer the Mars Rover at the Mars Rover Exhibition.

Opportunity is continuing its drive down Persevereance Valley, a channel that was cut in the inner wall of the 22 km-diameter Endeavour impact crater in ancient Mars (Noachian) time. This is the second stop of a series of stops as Opportunity drives down the valley. The goal is to collect field data that will help assess the origin of the valley. While the valley looks like a water-cut valley, we cannot be sure whether other processes like wind or drive flow have cut the valley. But that is why we are taking our time and collecting data as we drive. 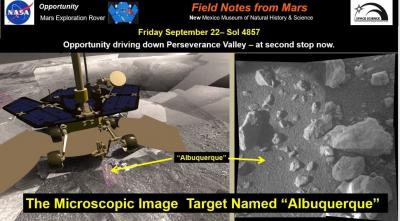 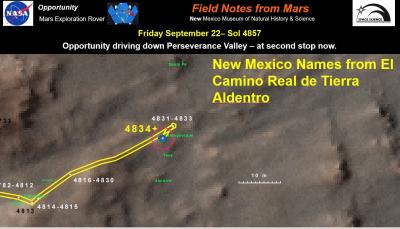 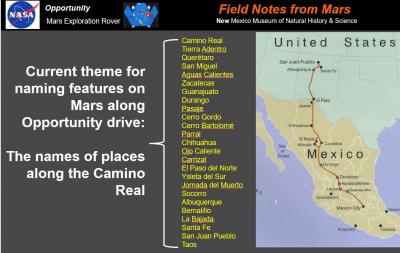 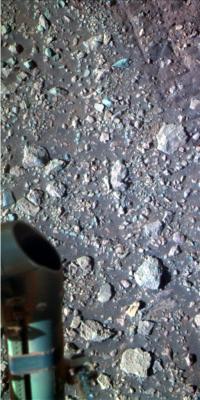 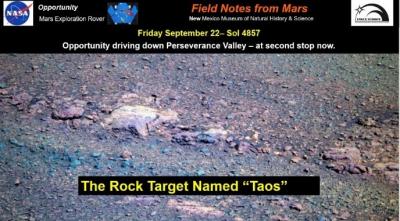 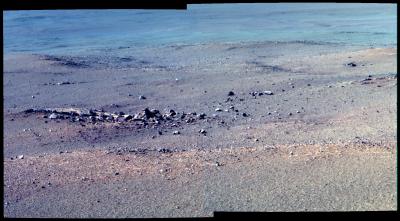 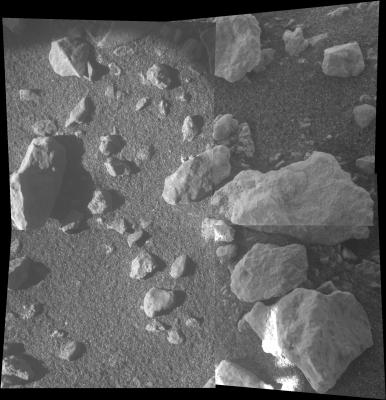 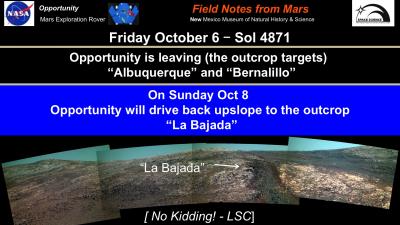 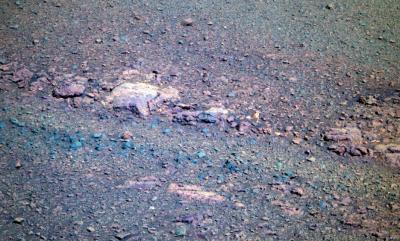