Bosque Redondo Memorial: Commemorating 150 Years since the Treaty of 1868

“This is a pivotal moment in time, where the stifled voices of the past will shed light on a dark chapter in American history.  It is time the truth is told,” said Aaron J. Roth, Historic Site Manager Fort Sumner Historic Site.

On the second weekend in June 2018, the Department of Cultural Affairs (DCA) is hosting several events in partnership with the Navajo Nation and the Mescalero Apache Tribe to celebrate 150 years since the signing of the Treaty of 1868 between the United States government and the Navajo Nation at Fort Sumner Historic Site/Bosque Redondo Memorial.  On June 8, DCA will reveal a sneak peek of the upcoming permanent exhibits of Bosque Redondo Memorial.

“We are revealing this new permanent exhibition at this time to allow stakeholders to provide direct feedback to guide the design and to essentially take ownership of the history,” Roth said. “Visitors will also have opportunities to contribute their oral traditions at the site, which will be incorporated in the final design.

“We are also hosting several speakers this weekend, to talk about the future of the Memorial’s exhibits and the importance of the Treaty of 1868,” Roth said.

Friday June 8 will offer a once in a lifetime opportunity for Navajo and Mescalero Apache visitors to shape a museum’s interpretation of their cultural history. On Saturday, June 9 visitors will have a chance to participate in a recreation of the Navajo return to the homeland to promote solidarity and reconciliation. This portion of the program is developed and lead by the Navajo Nation.

Also on Saturday, the 150th Treaty celebration will host cultural dances, respected speakers from tribal and state government, along with tribal elders sharing their oral traditions as they pertain to the hardships and resilience of life both during the reservation era as well as the post reservation era. Traditional foods and artisans will be on site in support the event and the culture.

After the event, visitors will have the option to participate in a 6.5-mile walk/run, led by DCA from Bosque Redondo Memorial to Fort Sumner High School in honor of the Navajo return to the homeland. Upon arriving at the high school, visitors can choose whether to continue the 350-mile walk back to Window Rock lead by the Navajo Nation, or remain at the high school for refreshments.

About the 1868 Treaty of Bosque Redondo: The Treaty of Bosque Redondo between the United States and many of the Navajo took place at Fort Sumner on June 1, 1868. Some of the provisions of the Treaty included: establishment of a reservation; placed restrictions on raiding; installed a resident Indian Agent and agency; mandatory education for children; supplied seed and agricultural implements.  The Treaty protected the rights of the Navajos, established railroads and forts, compensation to tribal members, and arrangements for the return of Navajos to the reservation.

The Navajo agreed for ten years to send their children to school and the U.S. government agreed to establish schools with teachers for every thirty Navajo children. The U.S. government also promised for ten years to give to the Navajos annually: clothing, goods, and other raw materials, not exceeding the value of five dollars per person, that the Navajos could not manufacture for themselves. 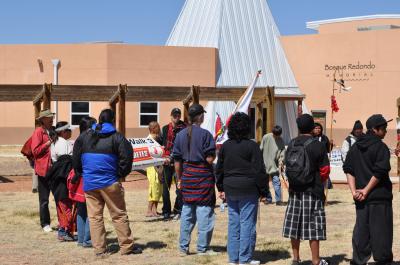 Participants in The Longest Walk 3 (2011) pray over the Bosque Redondo Memorial for the health of Navajo and Mescalero Apache to increase awareness of Type II diabetes, a post-contact disease. Courtesy: NM Historic Sites 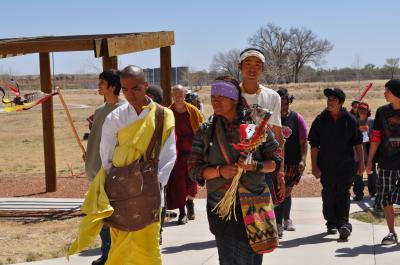 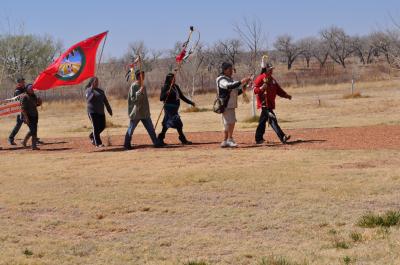 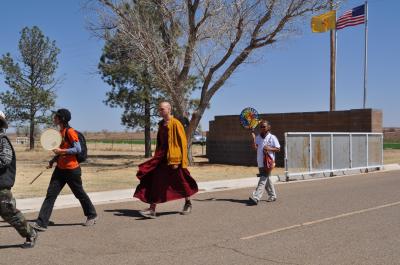