FOR IMMEDIATE RELEASE: Jan. 24, 2018 (Santa Fe, NM)—Cannupa Hanska Luger (Mandan  Hidatsa/Arikara/Lakota) will be at the Museum of Indian Arts and Culture on Saturday, February 24, 2018, for a day of making beads with the community.

The beads, 2”x 2” in size, are needed to complete a monumental beaded portrait which will be created by Luger from a photograph taken by First Nations photographer Kali Spitzer (Lower Post, British Columbia). This community collaboration acknowledges missing and murdered Indigenous women, girls, queer, and trans people. In Canada alone, the number of missing and murdered indigenous women was at 4,096 in 2016, as noted in research gathered by the Native Women’s Association of Canada.

“Cannupa Hanska Luger is doing important and vital work, which combines cultural analysis with dedication and respect for human beings, diverse materials, environments and communities with which he engages,” said Della Warrior, director of the Museum of Indian Arts & Culture.

The narrative of MMIWQT expands beyond a specific region by acknowledging this number and this place for this specific portrait – and the power of creating collectively – with the hope that we can move forward and continue to address MMIWQT in Indigenous homelands. This community engagement is meant to activate our processing MMIWQT through the action of doing and feeling in a collective effort to say “this is enough.”

Cannupa needs 4,000 beads to represent these women by April. MIAC invites the public to come and help make these beads for this commemorative art effort.  These beads are 2”x by 2”.  Supplies will be provided.  The goal is to make 1,001 beads on February 24, 2018. As attendees create, they are asked to hold awareness that each one of these beads represents an individual from the Indigenous community that has been lost.

destruction of the land to which we all belong. He provokes diverse publics to engage with Indigenous peoples and values apart from the lens of colonial social structuring.

More information is available at: http://www.cannupahanska.com/mmiwqtbeadproject

A great video (from which additional/other stills can be pulled) can be found linked on the site above or here, directly: https://vimeo.com/247198804

Where:           MIAC – the Meem Auditorium and the Education Classroom

Top: 2” x 2” beads of clay being made, and bottom hand holding ball of clay 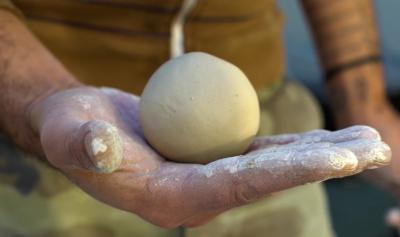 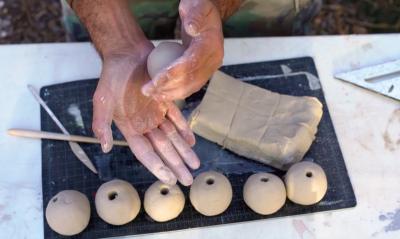