FOR IMMEDIATE RELEASE: March 8, 2018 (Santa Fe, NM)—Today, the Department of Cultural Affairs (DCA), the New Mexico Museum of Art, and the Museum of New Mexico Foundation announced a gift of $4 million, and unveiled the name and architectural design of the museum’s new contemporary art venue, located at 404 Montezuma, at the Santa Fe Railyard.

Philanthropists Ellen and Bob Vladem, full-time residents of Santa Fe since 2013, have given $4 million to the Centennial Campaign, the largest gift in the Museum of New Mexico Foundation’s History. As a result, the Vladems have been given the naming rights to the building, which will be called the Vladem Contemporary.

“On behalf of the State of New Mexico and the Department of Cultural Affairs, I extend our deep appreciation to Ellen and Bob Vladem for their overwhelming generosity,” said Cultural Affairs Secretary Veronica Gonzales. “We now have momentous support to exhibit and grow our contemporary collections. The visionary design of the architects honors the old and embraces the new. The new Vladem Contemporary will be a gateway, not only to the Railyard District and its thriving contemporary art scene, but also to the museum’s first location on the Santa Fe Plaza.”

“We are so grateful to the Vladems for their extraordinary gift, the largest ever received by the Museum of New Mexico Foundation,” said Jamie Clements, director of the Museum of New Mexico Foundation. “One and a half years into a $10 million capital campaign to fund this project, this generous contribution has taken our campaign total to $7.7 million.”

“One of the things that we really focused on, in addition to what the uses are, was that this is Santa Fe,” said Devendra Contractor, DNCA’s founding principal architect. “The new parts of the building have to venerate the existing historic pieces of the building. We developed an approach for the building that respects the history of Santa Fe, but also the future of Santa Fe,” he said.

The team of DNCA + StudioGP of Albuquerque was chosen to design the conversion of the building in July 2017.

Mary Kershaw, director of the New Mexico Museum of Art, pointed out the new venue’s great industrial aesthetic will offer a perfect size and scale for contemporary art. It will be used to present ambitious contemporary exhibitions, showcase working artists, and provide space for expanded educational programs. The iconic New Mexico Museum of Art’s 1917 building on the Santa Fe Plaza will focus on celebrating our state’s dynamic collection of 20th-century art and photography of the Southwest and continue to serve as a hub for community events and performances.

At its founding in 1917, the Museum provided a venue for living artists to exhibit their work. Santa Fe became a cultural destination known for the contemporary art of its day in the Southwest. As a result of the Centennial Campaign, the museum will operate at a level comparable to its founding in 1917, and in line with standards expected of top art institutions today. The museum will stage broader, more comprehensive exhibitions. Re-positioned and strengthened, the museum’s reputation and visibility will be enhanced on a national and international level. Other improvements include amenities for artists in residence, bolder education and outreach programs, and lively public spaces. The museum will continue building its collection of historic and contemporary art. Adapted for more contemporary exhibitions, the Vladem Contemporary will expand the Museum’s capacity as a second location within a single, high-functioning institution. 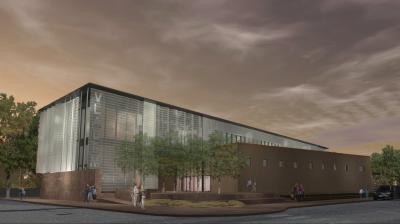