Crafting Memory: The Art of Community Peru — Places of Memory Featured Artists Tell Stories of Those Who Disappeared


(Santa Fe, New Mexico) – Three Peruvian artists whose work is featured in the current exhibition Crafting Memory: The Art of Community in Peru will spend an afternoon at the Museum of International Folk Art giving talks and meeting patrons on Sunday April 8 from 1 p.m.-4 p.m.

The featured speakers, Adelina Garcia, Wari Zarate, and Rosalia Tineo are three Quechua artist activists whose work is at the forefront of the fight for truth and reconciliation in the wake of the 20 year internal armed conflict that claimed the lives of nearly 70,000 Peruvians between 1980 and 2000. Using traditional folk arts of the region, they tell the stories of the disappeared.

The Places of Memory afternoon with lecture and meet and greet with the three Peruvian artists featured in the Crafting Memory: The Art of Community in Peru is free with museum admission, and admission is free to New Mexico residents with ID.:


The event is made possible by funding from: The International Folk Art Foundation, the Latin American and Iberian Institute at UNM, David and Edelma Huntley, Susan Howard and Vincent Pigott.

Adelina Garcia Mendoza is a founding member and former president of ANFASEP, the National Association of Families of the Abducted, Detained, and Disappeared of Peru. Formed in 1983 by a group of Quechua women looking for information about disappeared loved ones in Ayacucho, ANFASEP has become a leading human rights advocacy organization in the search for truth and reconciliation in post-conflict Peru. Adelina’s husband was disappeared in the middle of the night on January 12, 1983 when hooded soldiers burst into their home and dragged him from bed into the street. To this day she searches for information about his fate. He is one of the nearly 70,000 people disappeared during the 1980-2000 Internal Armed Conflict that shook Peru.

Adelina has received national and international awards for her work championing indigenous women’s rights.  During her time as president of ANFASEP she has traveled internationally as an ambassador of peace work and reconciliation, including presentations at the headquarters at the International Committee of the Red Cross in Geneva, Switzerland and solidarity building with survivors of the indigenous genocide in Guatemala.

Wari Zárate Gutiérrez is an indigenous artist and educator specializing in the use of art in personal and community healing. During Peru’s Internal Armed Conflict, he taught art classes for the war orphans of ANFASEP, the National Association of Families of the Abducted, Detained and Disappeared of Peru. In association with CHIRAPAQ, the Center for Indigenous Cultures of Peru, he directed the ÑORANCHIQ program from 1990 to 2000, working with children and adolescents in marginalized zones of Ayacucho. The program focused on cultural identity and resilience during the violence of Peru’s Internal Armed Conflict. He has also worked with First Nations communities in Montreal, Canada using art as therapy for adults who have been incarcerated and struggle with addiction.

Wari has traveled internationally giving talks at universities and museums in Bolivia, Canada, Colombia, the Dominican Republic, Puerto Rico, Spain, and the United States. He has written two books on developing skills and abilities for Quechua children. His artwork is featured in the Museo de la Memoria (Memory Museum) of ANFASEP, Ayacucho and the Lugar de la Memoria, Tolerancia, y Inclusión Social (Place of Memory, Tolerance, and Social Inclusion), Lima, Peru. He is currently a Professor of Fine Arts at the Escuela Nacional Superior Autónoma de Bellas Artes in Ayacucho, Peru.

Rosalía Tineo Torres is a third-generation ceramic artist in Ayacucho, Peru.  Her father, Leoncio Tineo Ochoa became famous for his sculpted ceramic figures that also are whistles. Designer Alexander Girard collected dozens of Leoncio’s pieces in the 1950’s that later became part of the Museum of International Folk Art’s permanent collection. Like many in Ayacucho during Peru’s Internal Armed Conflict, Leoncio was kidnapped, detained, and tortured. He survived the ordeal but died in 1996.  Rosalía continues her father’s tradition of whistle figurines and in addition to her folkloric pieces she has begun to sculpt scenes that represent what happened to her family during the years of violence. These figural whistles include depictions of her father blindfolded being struck by the butt of a rifle at the hands of roaming militia. It is through her artwork that she tells the story of her family in an effort to prevent such violence in the future. Her work is displayed at the Lugar de la Memoria, Tolerancia, y Inclusión Social (Place of Memory, Tolerance, and Social Inclusion), Lima, Peru, a museum of the Peruvian Ministry of Culture. Her son is apprenticing with her, becoming the fourth generation of ceramic artists. The collaboration with the Museum of International Folk Art will be the first time she travels to the United States. 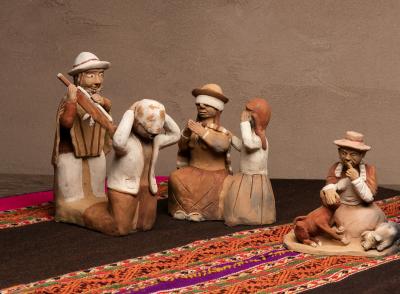 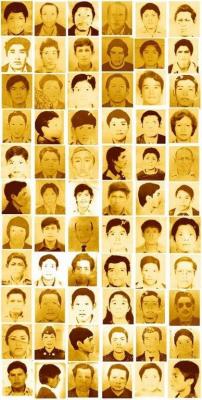 Disappeared 1-2 Photos collage of some of the people who were disappeared from Ayacucho, Peru. Photographer: unknown, Courtesy of the National Association of the Families of the Disappeared of Peru 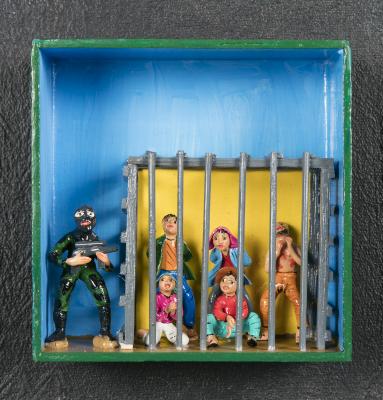 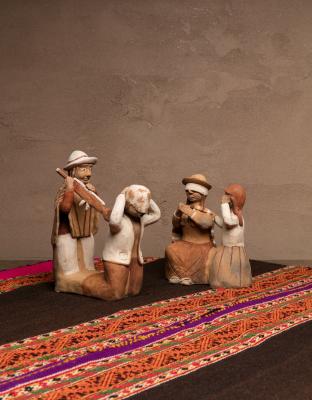 Crafting Memory: The Art of Community Peru — Places of Memory Featured Artists Tell Stories of Those Who Disappeared 04/08/18