The Museum of Indian Arts & Culture Presents Against All Odds: The Education of a Jicarilla Apache Chief’s Family


FOR IMMEDIATE RELEASE: April 11, 2018 (Santa Fe, NM)—On Sunday, April 29, 2018, from 1 to 3 p.m., the Museum of Indian Arts and Culture will feature a panel comprising six of the seven children of Albert Velarde Jr. from the Jicarilla Apache Nation. They will offer a formal program about their college experiences from their Native perspectives, a question and answer session moderated by Veronica Tiller, Ph.D., daughter of Albert Velarde Jr., and plenty of time for queries from the audience. The panel has been organized to complement MIAC’s current exhibition, Lifeways of the Southern Athabaskans.

Not too long after the Jicarilla Apache Indian Nation was established in Northern New Mexico in 1887, James Garfield Velarde made a promise to his brother Huerito Mundo that he would send his son, Albert Velarde, on for an education. Albert Velarde would eventually go to Fort Lewis Indian Boarding School, which was established in the 1880s, and plant the seeds for all seven of his son Albert, Jr.’s children to attain higher education degrees.

“Our father comes from a great line of Chiefs,” says Tiller. “They always promoted education. We needed to be educated to live in a white man’s world. And, to become better Apaches.”

Born to Rebecca Monarco and Albert Velarde, Jr., who were both ranchers on the Southern part of the Jicarilla Reservation, Tiller and her six siblings, against the greatest of odds, all reached different levels of post-secondary education. Their educations range from brother Lindberg, who attained an Associate in Arts degree, to Veronica Tiller, herself, who earned a Ph.D., her sister Bernice, a JD., Roberta and Bob hold BAs, and Alberta and Mary hold an MA and an MFA, respectively.

“Our parents always told us that we should obtain an education,” Tiller said. “I’m fairly certain my mother made it to eighth grade, and my father, to third, so we were taught both our Apache culture and ‘white’ culture growing up. But we didn’t give up being Apache to be second class ‘white people.’”

About the Museum of Indian Arts and Culture As the 19th century closed, one of the Southwest’s major "attractions" was its vibrant Native American culture. In response to unsystematic collecting by Eastern museums, anthropologist Edgar Lee Hewett founded the Museum of New Mexico in 1909 with a mission to collect and preserve Southwest Native American material culture. Several years later, in 1927, John D. Rockefeller founded the renowned Laboratory of Anthropology with a mission to study the Southwest’s indigenous cultures. In 1947 the two institutions merged, bringing together the most inclusive and systematically acquired collection of New Mexican and Southwestern anthropological artifacts in the country. 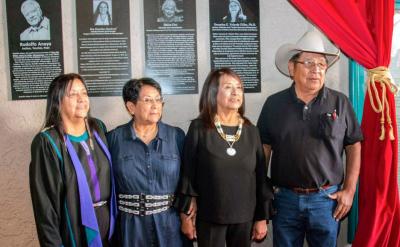 Velarde Family at Wall of Fame