New Mexico’s remarkable agricultural story covers 4,000 years, 121,000 square miles, and boasts great diversity, both in the people and the food they raised.

The New Mexico Farm & Ranch Heritage Museum in Las Cruces is celebrating 20 years of sharing this story with a week of activities May 15-19. The annual Blessing of the Fields begins at 10 a.m. on May 15, and the festivities end with a special day of activities on May 19.

Preserving New Mexico’s unique history of farming, ranching and rural life became a subject of interest in the 1970s. Dr. William P. Stephens, the New Mexico Secretary of Agriculture at the time, was concerned that this history was being lost, both as early 20th century settlers passed away and as valuable artifacts and archival collections left the state. He conceived of a program that would recognize pioneering and long-time farm and ranch families.

Stephens shared his vision with then-president of New Mexico State University, Dr. Gerald Thomas, and the two worked for several years with agricultural producers and other interested individuals and groups from around the state to build support and momentum for the project of creating a museum. The first formal meeting was in 1987 and in early 1989, these supporters incorporated as the New Mexico Farm and Ranch Heritage Institute Foundation, a grassroots organization to raise funds for a proposed museum using the theme "So the Future May Know."

The state Legislature’s passage of the Farm and Ranch Heritage Museum Act in 1991 established the Museum and its policy-making board, making it a part of the state’s Office of Cultural Affairs, later becoming the Department of Cultural Affairs.

Ground was broken for the museum in August 1995. The event was not the typical groundbreaking. After a group of Heritage Riders rode in on horseback delivering shovels and post-hole diggers to the dignitaries, including former governor Bruce King, volunteer Alvin Davidson plowed across the building site with his 1937 John Deere tractor. The first livestock arrived in December 1995 -- a herd of 19 Longhorn cattle, formerly from Chicosa Lake State Park.

Dedication of the Museum took place on April 19, 1997, with an estimated 4,000 people in attendance. Work then began on putting together a staff, securing oral histories, collecting artifacts and building exhibits. On May 17, 1998, the museum opened to the public.

For the past 20 years, the 47-acre patch of desert on the southeastern edge of Las Cruces has blossomed into a vibrant, world-class museum with several structures, outstanding permanent and changing exhibits, a livestock program that is considered a “national model,” educational offerings for children and adults, and popular annual events.

Blessing of the Fields

The Museum celebrates an old, historical tradition with the annual Blessing of the Fields. May 15 is the traditional feast day of San Ysidro, the patron saint of farmers and laborers. Visitors can join the colorful, music-filled procession around the Museum’s campus as the livestock, plants, water, and bread are blessed in the tradition of the day. The procession will be led by Most Rev. Oscar Cantu, Bishop of the Roman Catholic Diocese of Las Cruces. Piñata making (and busting) also is part of the fun. Admission to participate in the procession is free.

The public is invited to a brown bag lunch and history talk featuring a local historian. Drinks and dessert will be provided for this free program inside the Museum’s Organ View Terrace, but participants must bring their own lunch. This program is in lieu of the regular, monthly Culture Series.

The New Mexico Vintage Iron tractor club will be on site May 18-19. The group will have antique tractors on display, as well as lawn tractors, hit-and-miss engines, a grist mill and rope making. They also will have lawn and garden tractor sled pulls, as well as parades and cart rides. Regular Museum admission is required on May 18: $5 for adults, $4 for senior citizens, $3 for children 4 to 17, and free for children 3 and under, as well as Museum Friends members.

The Museum’s new lobby showpiece is the Luis Jiménez sculpture, "Sodbuster, San Isidro." The unveiling and reception will include drinks and hors d’oeuvres. 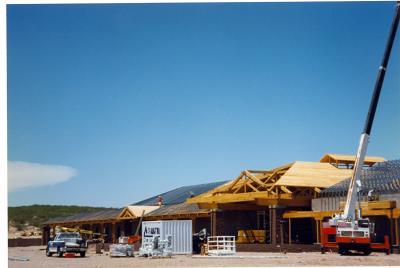 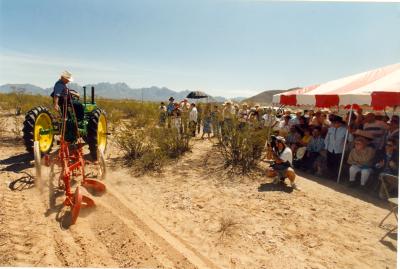