(Santa Fe, NM)—The New Mexico Department of Cultural Affairs and the Bosque Redondo Memorial, a New Mexico Historic Site and an International Site of Conscience, announce that the third and last-remaining copy of the Treaty of Bosque Redondo has been found in Manchester, Massachusetts. The authenticity of the 150-year-old, 17-page, handwritten document was confirmed by the National Archives last month, its owner stated.

The treaty’s owner is author and historian C.P. “Kitty” Weaver, great-grandniece of Indian Peace Commission officer Samuel F. Tappan (1831–1913), who, along with William T. Sherman, negotiated with Navajo leader Barboncito to draft the 1868 Treaty of Bosque Redondo. The historic treaty ended the forced internment of Navajos and Mescalero Apaches at the Bosque Redondo Reservation near present-day Fort Sumner, allowed them to return to their homelands, established the sovereignty of the Navajo Nation, and effectively ended the period of history from 1863 to 1868 commonly known as the “The Long Walk.” During this time, the U.S. Army removed 9,500 Navajo and 500 Mescalero Apache people from their homelands and forced them to walk 400 miles to an internment camp known as the Bosque Redondo Reservation. Though considered “prisoners of war” many were, in fact, elders, women, and children. Many died on the way; more died of starvation and disease at the camp.

In 1868, Sherman and Tappan arrived at the Bosque Redondo Reservation with instructions to relocate its captives to Oklahoma’s Fort Sill. Instead, Barboncito proposed that the people be allowed to return to their homelands—and the representatives from the Indian Peace Commission listened. This landmark decision greatly influenced the recovery of both tribes and their autonomy today. In the time period since the Treaty of Bosque Redondo was signed, the Navajo Nation has grown to a population of 250,000 and the Mescalero Apache to 4,000.

This June 8 and 9, 2018, events at the Bosque Redondo Memorial will celebrate the 150th anniversary of the treaty and the 50th anniversary of the memorial. Weaver and her husband, David, will be present with the 17-page treaty, portions of which will be on view. The mood is expected to be both reverent and celebratory with plans for a new exhibit on display, ceremonial activities, and tribal dances. Native artisans will be on site offering traditional jewelry, weavings, and food. On June 9, a seven-mile walk from the memorial to Fort Sumner High School will honor the memory of The Long Walk. Visitors are encouraged to participate.

“What I’m finding interesting and pleasing is that it is today’s Navajos that are bringing Tappan out of the woodwork,” said Weaver, who is presently compiling a book on her ancestor who was also a journalist, Union Army captain, and abolitionist, who continued to be a voice for Native American rights after his work at Bosque Redondo. “Tappan was a very strong, willful individual, but he’s been in the background of so many things,” she said. “I think he would be pleased that today’s Navajos are making his life known, and I think that’s wonderful.”

Weaver also notes that she has been sharing her primary source material on Tappan with Navajo filmmaker and playwright Lena Carr, of Albuquerque, who is also researching and writing about The Long Walk.

“I wish Americans of this nation would care more about the Native Americans,” Weaver said. “This information needs to be out there now. That’s why I’m letting go of materials I’ve been harboring for a while.”

Weaver lives in Massachusetts in the Tappan family home, where Samuel F. Tappan returned after a life out West with a trunkful of what would become artifacts—including journals, letters, notes about treaty proceedings, and of course, a copy of the treaty itself. Three copies of the Treaty of Bosque Redondo were made. The first was presented to President Andrew Johnson (1865–1869), and remains in the National Archives. The second was presented to the Navajo Nation, and its whereabouts are unknown. It is widely believed to have been buried with Barboncito upon his death in 1871. Weaver’s copy, the Indian Peace Commissioners’ copy, is the third.

Weaver said she was aware she possessed the treaty, but didn’t know if its rarity until a colleague, a historian at the Library of Congress, inquired about it.

“I knew I had it all along,” she said with a laugh. “I just didn’t know anyone else was interested.”

Weaver notes that the treaty was rolled into a scroll and tied with a red ribbon as was the custom in the 1800s. It is also the origina of the expression "red tape" to describe government bureaucracy. 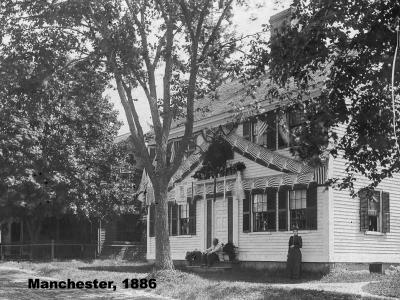 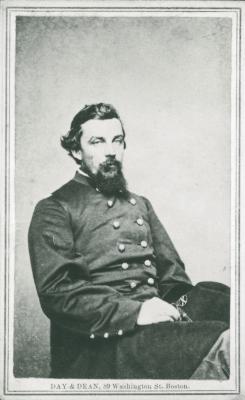 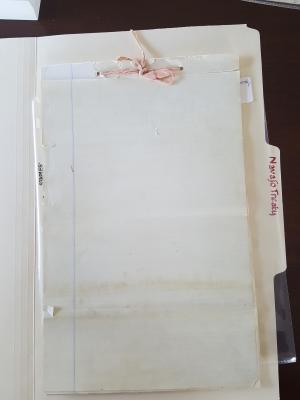 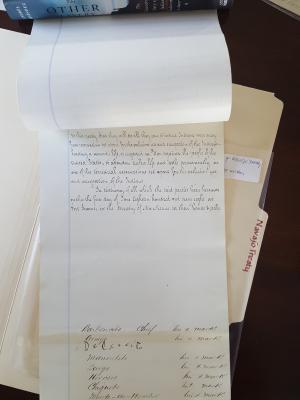 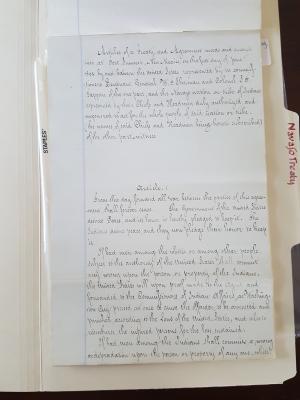