(Santa Fe, New Mexico) -- The Museum of Indian Arts and Culture (MIAC) is commemorating the 150th anniversary of the signing of the Treaty of Bosque Redondo, signed June 1, 1868, by displaying an extraordinary wool rug woven in tribute to the Long Walk. Created in the early 1900s, the rug is an impressive 9 ft. by 15 ft., last displayed at MIAC in 1996.

Hweeldi: The Woven Tribute will be open for viewing on Friday, June 1 with a panel discussion about Navajo weaving at 1 p.m. A special public opening on June 3 from 1- 4 p.m. is scheduled and will include remarks, a lecture with UNM Professor Jennifer Denetdale (Navajo) (UNM), refreshments, dancers, and intimate guided discussions about the rug with docents and staff. The event is free to New Mexican’s with ID because it falls on the first Sunday of the month. 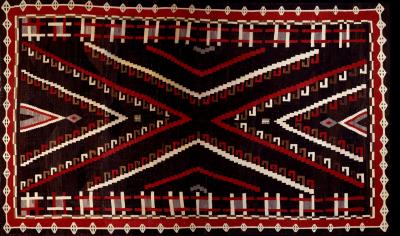