The New Mexico State Library has announced the state level champions of the 2018 Letters About Literature competition. This annual writing contest for young readers in grades 4 through 12 is made possible by a generous grant from the Dollar General Literacy Foundation and is administered nationally by the Library of Congress Center for the Book.

Letters About Literature encourages young readers in grades 4 -12 to read a book and write a personal letter to the author explaining how the book changed or shaped their perspective on themselves or the world. The New Mexico State Library manages the state level program and submits a champion to the national competition for each of the three levels.

Kaelyn Siefkes, a fifth grade student at Estancia Valley Classical Academy in Moriarty, is the Level 1 champion.  Kaelyn wrote her letter to Rachel Renee Russel about her series, The Dork Diaries.

Allie Vice, a seventh grade student at Eisenhower Middle School in Albuquerque, is the Level 2 champion. Her letter is addressed to Out of My Mind author, Sharon M. Draper.

Steffen Ortiz, a tenth grade student at East Mountain High School in Sandia, is the Level 3 champion. Steffen wrote his letter to Markus Zusak about his book, The Book Thief.

The three New Mexico champions’ letters now advance to the national competition and will be sent to the Library of Congress for the national judging round, where they will be competing for a $1000 cash award. The results of the national contest will be released in May. 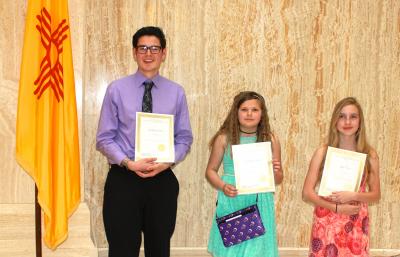