A powerful, colorful representation of the determination of farming is about to be on full display in the lobby of the New Mexico Farm & Ranch Heritage Museum’s Bruce King Building.

The new showpiece is the sculpture, "Sodbuster, San Isidro," by the late Luis A. Jiménez, Jr. The sculpture will be presented at a reception from 5-7 p.m. on May 18. The free reception includes hors d’oeuvres and a cash bar, and is part of the weeklong celebration of the museum’s 20th Anniversary.

As part of the reception, Christian Waguespack, the Curator of 20th Century Art at the New Mexico Museum of Art in Santa Fe, will speak in the museum’s theater about the artist and his work, including the dramatic, fiberglass “Sodbuster, San Isidro” sculpture.

“Luis Jiménez’s monumental sculpture ‘Sodbuster, San Isidro’ will serve as a centerpiece for the Farm & Ranch Museum as visitors enter our main lobby,” said Museum Director Mark Santiago. “The sculpture is very unique and in many ways evokes the different cultural streams that flowed together to produce the vibrant agricultural traditions here in New Mexico.”

Jiménez’s widow, Susan B. Jiménez of Hondo, N.M., will attend the reception. The sculpture is on loan from collector Russell Tether of Dallas.

Jiménez, who died in 2006 at his studio in Hondo, was born in El Paso in 1940. He is best known for his large-scale, brightly colored sculptures steeped in the Mexican-American culture of New Mexico and Texas. Jiménez used fiberglass and spray paint in much of his work. Jiménez’s works were considered controversial by the art world yet respected in Hispanic communities for his ability to poignantly represent a different perspective and narrative of the history and culture of Mexico and the Southwest.

The 22-feet-long “Sodbuster, San Isidro” sculpture is a bearded farmer, muscles flexing as he walks behind two oxen pulling a plow. Jiménez created the piece in 1982 as part of the Art in Public Places program and its original location was in Fargo, N.D. A version of the sculpture was at the Farm & Ranch Heritage Museum in 2002.

His works are in the collections of the Smithsonian American Art Museum in Washington, D.C., the Albuquerque Museum, the El Paso Museum of Art, the Metropolitan Museum of Art in New York, the Art Institute of Chicago, and the Museum of Fine Arts in Houston, among others.

The week of activities celebrating the museum’s 20th anniversary begins with the Blessing of the Fields procession from 10-11 a.m. on May 15. New Mexico Vintage Iron tractors will be on site doing demonstrations on May 18-19, and the week concludes with a day of activities, rides, and demonstrations from 9 a.m. to 4 p.m. on May 19. 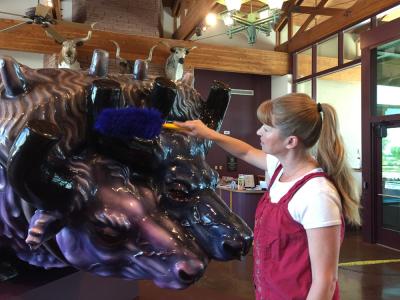