“All totaled, that’s about 18,650 students from all grade levels of public schools, private and charter schools and students who are home schooled,” said Margie Marino, Director of the the Museum of Natural History and Science. “These figures also reflect civic groups, like Boy Scouts and Girls Scouts. The age appeal for the Da Vinci exhibit contact is mostly attracting middle and high school aged groups from all around New Mexico.”

Da Vinci—The Genius remains on exhibition at the NMMNHS through July 29, 2018. Since it opened February 10, in addition to the school groups, more than 40,000 people have bought tickets to the exhibition as of close of business May 31. That tally does not include groups, evening openings and special events.

“More than 5000 additional students have come through the museum during da Vinci than during the same time period last year,” Marino explained.

“Even though the traditional school year has ended, we still have many more groups of students who will visit before the exhibition closes at the end of July,” Marino said. ‘Currently we still have 18 more groups and approximately 777 students schedule to visit the exhibit this summer. And we obviously expect the general admission numbers will continue at higher levels throughout the run of the da Vinci exhibition.”

Also during the 2017/2018 school year, the Museum’s Sandia Mountain Natural History Center served an additional 20,000 school students, 15,000 at its campus in the East Mountains, and another 5000 through its statewide outreach program.

About the New Mexico Museum of Natural History & Science: http://www.nmnaturalhistory.org. Established in 1986, the mission of the New Mexico Museum of Natural History and Science is to preserve and interpret the distinctive natural and scientific heritage of our state through extraordinary collections, research, exhibits and programs designed to ignite a passion for lifelong learning. The NMMNHS offers exhibits, exhibitions, programs, and workshops in Paleontology, Geoscience, Bioscience, Earth Science, Natural Science, Gemology, is the Southwest’s largest repository for dinosaur fossils, and includes a Planetarium and a DynaTheater. A division of the New Mexico Department of Cultural Affairs, the Museum is open 7 days a week, from 9:00 a.m. – 5:00 p.m., closed Thanksgiving, Christmas, and New Year’s Day. 1801 Mountain Road NW, northeast of Historic Old Town Plaza, Albuquerque, NM 87104, (505) 841-2800. Events, news releases and images about activities at the Museum of Natural History and Science and other in divisions of the Department of Cultural Affairs can be accessed at media.newmexicoculture.org. 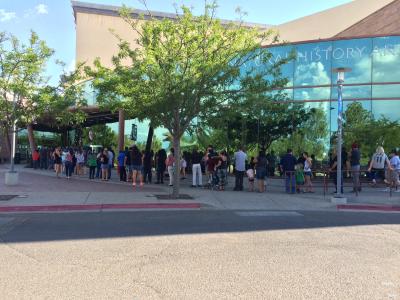 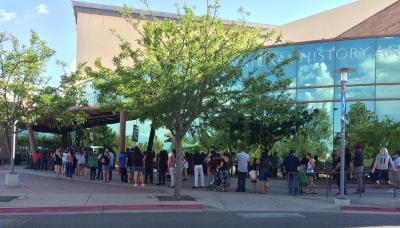 Long lines around Museum of Natural History to see Da-Vinci