Exhibits at the New Mexico Farm & Ranch Heritage Museum are in galleries, hallways, outdoors, and even in barns.

Inside the towering Horse & Cattle Barn on the southern edge of the 47-acre campus in Las Cruces is a revamped exhibit that gives visitors a look at the importance and art of saddle making. “Saddle Makers of the Southwest” features a leather-stamping activity for children, dozens of tools, and saddles in various stages of creation.

The saddle was the most critical tool of the cowboy; it was one of the most expensive purchases he would make, so he wanted a good, durable saddle that was specific to the work he was doing - whether it was riding the range on a cattle drive, roping and branding calves, or at the rodeo. Cowboys sought out particular saddle makers for their custom orders and based their selections on the makers’ reputations for making exactly what the cowboy needed and used.

Four of the region’s top saddle makers are featured in the exhibit.

Austin “Slim” Green (1916-2007) made saddles and harnesses for the U.S. Cavalry at Fort Riley, Kansas during World War II. After his service, he settled in the Santa Fe area where he created strong, durable, comfortable, and beautiful saddles were popular with everyone from working cowboys to celebrities. He retired in Las Cruces in the early 2000s, and donated all the items of his shop to the Museum.

S.D. Myres (1871-1953) opened his first shop in Sweetwater, Texas, in 1897 and relocated to El Paso in 1920. During World War I, he volunteered his entire saddlery business to the War Department. Described as a great conversationalist and storyteller, Myres attended cattlemen’s conventions to advertise his business. He felt that a saddle maker’s reputation relied upon high-profile trophy saddles, such as the $10,000 diamond- and ruby-studded saddle he made for the Miller101 Ranch Wild West Show. Even though his saddlery filled hundreds of orders each year, individual craftsmanship was the hallmark of a Myres saddle.

James Morris, who was born in 1943 in Carrizozo, N.M., grew up on a New Mexico ranch 40 miles west of Roswell. Morris built his first saddle when he was 18 years old while an apprentice for Harlan Webb, who had worked for E.T. Amonett. Morris still builds custom saddles, chaps, purses, belts, and other leather goods at his shop just west of Caballo, N.M.

E.T. Amonett (1868-1950) started out in the leather business as a harness maker. It is unknown if he was already a saddle maker when he moved his family to Roswell in 1898, where he purchased an existing saddle and leather shop. E.T. Amonett Saddlery quickly became one of the major businesses in the region.By 1912, E.T.’s recently married son, Edd Amonett (1892-1963), had joined his father as a leather worker and saddle maker. E.T. decided it was time to expand so, leaving Edd to operate the Roswell store, he opened a second location in El Paso. 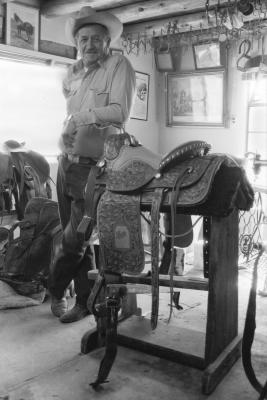