(Santa Fe, New Mexico) – Admission to the Museum of Indian Arts & Culture on Santa Fe’s Museum Hill will be half-price while the Here Now and Always core exhibit is closed from February 11 through 22, 2019 for upgrades to the HVAC system in the gallery.

The reduced admission fee of $3.50 for New Mexico residents, and $6 for non-residents will be in effect starting Monday, Feb. 11 and continue through and includes, Feb. 22, 2019. Regular prices will resume Saturday, Feb. 23.

As the 19th century closed, one of the Southwest’s major "attractions" was its vibrant Native American cultures. In response to unsystematic collecting by Eastern museums, anthropologist Edgar Lee Hewett founded the Museum of New Mexico in 1909 with a mission to collect and preserve Southwest Native American material culture. Several years later, in 1927, John D. Rockefeller founded the renowned Laboratory of Anthropology with a mission to study the Southwest’s indigenous cultures. In 1947 the two institutions merged, bringing together the most inclusive and systematically acquired collection of New Mexican and Southwestern anthropological artifacts in the country. The Museum of Indian Arts and Culture is a division of the Department of Cultural Affairs. Hours: 10 a.m. to 5 p.m. daily, May through October; closed Mondays November through April, closed Easter Sunday, Thanksgiving, Christmas and New Year’s. 710 Camino Lejo off Old Santa Fe Trail, Santa Fe, NM 87504, Phone: (505) 476-1269. Events, news releases and images about activities at the Museum of Indian Arts and Culture and other in divisions of the Department of Cultural Affairs can be accessed at media.newmexicoculture.org. 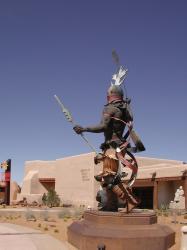