A legendary New Mexico mystery is the subject of this month’s Culture Series at the New Mexico Farm & Ranch Heritage Museum.

Historian and author W. Michael Farmer will discuss the trial of rancher Oliver Lee at 7 p.m. on June 13. Admission to this presentation in the Museum’s Theater is free.

The ensuing investigation and trial featured many famous characters in New Mexico history, as well as a circus-like atmosphere, and a "political donnybrook," as Farmer calls it. The end result was an 18-day trial that was deliberated for less than eight minutes and a mystery that endures.

W. Michael Farmer combines more than 10 years of research into nineteenth-century Apache history and culture with Southwest-living experience to fill his stories with a genuine sense of time and place. A retired Ph.D. physicist, his scientific research has included measurement of atmospheric aerosols with laser-based instruments, and he has published a two-volume reference book on atmospheric effects on remote sensing.

He has also written short stories for anthologies and award-winning essays. His first novel, Hombrecito’s War, won a Western Writers of America Spur Finalist Award for Best First Novel in 2006 and was a New Mexico Book Award Finalist for Historical Fiction in 2007. His novels include: Hombrecito’s Search; Tiger, Tiger, Burning Bright: The Betrayals of Pancho Villa; Conspiracy: The Trial of Oliver Lee and James Gililland; Knight’s Odyssey, The Return of Henry Fountain; Knight of the Tiger, The Betrayals of Henry Fountain; and The Last Warrior. His books won four major awards in 2018. Silver Medallions from the Will Roger Medallion Awards for Western Fiction were awarded for Mariana’s Knight, The Revenge of Henry Fountain, and for Blood of the Devil, The Life and Times of Yellow Boy, Mescalero Apache, Book 2. The New Mexico-Arizona Book Awards presented Apacheria, True Stories of Apache Culture, 1860-1920, with top honors for Best History-Other and it was also judged the New Mexico Book of the Year. In 2017 the New Mexico-Arizona Book Award for Historical Fiction went to Mariana’s Knight, and Killer of Witches, The Life and Times of Yellow Boy, Mescalero Apache, Book 1, was a finalist. Killer of Witches was also recognized by the Will Rogers Medallion Awards for Western Fiction in 2016. 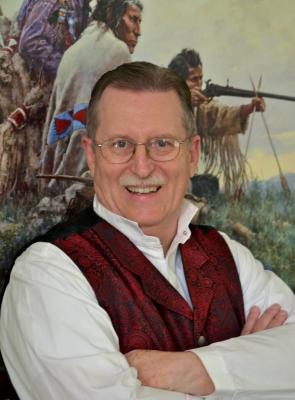