The “Dig Giusewa” Project focused on archaeological investigations of a large rectangular room just north of the Visitor Center at Jemez Historic Site. Over the course of the fall (Aug. 16 – Nov. 6) and spring (March 7 – April 6) field seasons, New Mexico Historic Site staff, Jemez Pueblo tribal members, University of New Mexico graduate students, and Friends of Coronado and Jemez Historic Site volunteers work address long-held questions about the Jemez people involving their origins and how their lives changed after the arrival of the Spanish. This resulted in the collection of over 10,000 artifacts and the documentation of structure thought to have been abandoned during the Pueblo Revolt of 1680

It is the second award given to New Mexico Historic Sites Public Archaeology Program, since its inception in 2017. The first was an Award of Merit given to Coronado Historic Site and the Friends of Coronado and Jemez Historic Site for the “Dig Kuaua” Project, by the American Association of State and Local History at their 2018 annual conference in Kansas City, Missouri.

At the awards ceremony in Santa Fe, New Mexico Historic Preservation Month posters were also released. This year, one of two posters featured Jemez Historic Site. The image, taken by Dan Monaghan of the New Mexico Department of Tourism, is of excavations during the “Dig Giusewa” Project. Copies of the poster are available at both Coronado and Jemez Historic Sites.

The very next day, May 18, Jemez Historic Site hosted an exhibit opening to honor and acknowledge the massive overhaul of the Visitor Center completed by students enrolled in the New Mexico Highlands University Program in Interactive Cultural Technology (PICT). This program is coordinated by the Media Arts Chair Miriam Langer. The new visitor experience includes 3d projection mapping, an oral history video, children’s activity booklet, updated trail guide and visitor center tourist kiosk. However, modifications and improvements to the exhibit are expected to continue throughout the summer of 2019.

Both the award and new exhibits are on display now at Jemez Historic Site. Jemez Historic Site is located at 18160 Highway 4 in Jemez Springs, New Mexico, and is open Wednesday through Sunday, 8:30 a.m. to 5 p.m. Admittance is $5.00 per adult. Children and Jemez Tribal Members are free. For more information call 575-829-3530 or visit http://www.nmhistoricsites.org/.

On March 14, 1931, the New Mexico Historic Site system was established by an Act for the Preservation of the Scientific Resources of New Mexico, to "declare by public proclamation that historic and prehistoric structures and other objects of scientific interest that are situated upon the lands owned or controlled by the State of New Mexico, shall be state monuments, and may reserve as a part thereof such parcels of land as may be necessary to the proper care and management of the objects to be protected." Under the direction of the New Mexico Department of Cultural Affairs, six sites are open to the public: Coronado, Fort Selden, Fort Stanton, Fort Sumner Historic Site/Bosque Redondo Memorial, Jemez, and Lincoln. The Los Luceros Historic Property is open to the public during scheduled events and by appointment (505) 476-1130. 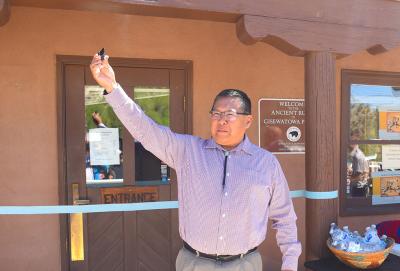