(Santa Fe, New Mexico) – New Mexico Historic Sites are hosting two major commemorative events in August. The 16th annual Pueblo Independence Day celebration will be held Sunday, Aug. 11, in the village of Jemez Springs. The event commemorates the events of Aug. 10, 1680— when the Pueblo People of New Mexico and Arizona launched a successful rebellion against Spanish colonization. Later in August, the Bosque Redondo Memorial at Fort Sumner launches Summer Letters from the Reservation, a series of letters and oral histories on the lives of the people at Bosque Redondo reservation. (*Media resources for both events available.)

Commemorative activities will begin with a pilgrimage run from Walatowa plaza in Jemez Pueblo to Giusewa Pueblo kiva at Jemez Historic Site (approximately a half-marathon or 13 miles).

“Participating in this run, or supporting a runner, is a way to pay tribute to the Ancestors and show appreciation for the sacrifices they made,” said Marlon Magdalena, ranger at the Jemez Historic Site. “Their brave resistance helped preserve the Pueblo way of life: our culture, our languages and our right to one day reclaim our aboriginal lands.”

The run begins at 7 a.m., and the public is welcome to participate.

At 10 a.m., guest speakers will welcome all the runners and their sponsors to the site. The following festivities, between 10:30 a.m. and 3 p.m., will feature Jemez traditional dances. There will also be authentic Native arts & crafts and Native food. There is no admission fee for any of the activities related to this event.

A short drive from Albuquerque and Santa Fe, Jemez Historic Site is one of the most beautiful prehistoric and historic sites in the Southwest. It includes the stone vestiges of a 700-year-old village and the San José de los Jémez church dating to 1621. The village of Giusewa was built in the narrow San Diego Canyon by the ancestors of the present-day people of Jemez (Walatowa) Pueblo. The name Giusewa refers to the natural springs in the area.

In the 17th century, the Spanish established a Catholic mission at the village. The mission was short-lived, and, in time, the people abandoned the site and moved to the current location of Jemez Pueblo. San José de los Jémez church is unusual for its massive size and rare, octagonal bell tower. Colorful frescos that once decorated the interior walls were revealed during archaeological excavations in 1921 and 1922. The massive stone walls were constructed about the same time the Pilgrims landed at Plymouth Rock. The heritage center contains exhibitions that tell the story of the site through the words of the Jemez people. A 1,400-foot interpretive trail winds through the impressive site.

On Saturday, Aug. 17 Bosque Redondo Memorial at Fort Sumner hosts Summer Letters from the Reservation, a series of letters and oral histories read in chronological order, to represent the lives of the people on the Bosque Redondo Reservation, as well as the policies employed by the U.S. government toward Navajo and Mescalero Apache people from the summer months of June, July and August 1863 to 1868.

Supper will be followed by the letter reading in the site auditorium until 7 p.m. The event and food are free and are sponsored by the National Endowment for the Humanities.

Members of the public who want to participate in the program may volunteer by contacting the site.

Media Resources approved for use by NM Dept. of Cultural Affairs: 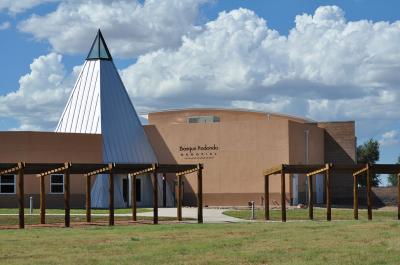 Summer Letters from the Reservation 08/17/19