(Albuquerque, New Mexico) – Fundraising efforts are underway to bring New Mexico’s Bisti Beast home in a new life-size electrifying form. The New Mexico Museum of Natural History & Science (NMMNHS) is raising funds to purchase a robotic, animated Bisti Beast to be a key attraction at the museum. The tale of this animatronic dinosaur stretches from Albuquerque to Japan and back.

An early relative of Tyrannosaurus rex, the Bisti Beast fossil was discovered in 1997, and excavated in 1998 from the Bisti/De-na-zin Wilderness in the Four Corners of New Mexico by NMMNHS paleontologist Dr. Thomas Williamson, Ph.D. In 2010, Dr. Williamson wrote a paper with Thomas Carr which described this amazing find and named the Bisti Beast (Bistahieversor). This research caught the attention of researchers at the Fukui Prefectory Museum in Fukui Japan.

Japanese representatives were eager to acquire some of the fossils for a temporary exhibition that was going to tour Japan called “The Great Journey of Dinosaurs  and asked if NMMNHS could loan them a group of paleontological fossils and casts that curators of the Museum had discovered in New Mexico, among them the Bisti Beast.

Once the complex process of loaning these materials was completed, Dr. Williamson and Museum Director Margie Marino traveled to all three sites of the exhibition—Fukui, Nagoya, and Chiba City/Tokyo—at the request of the sponsors and to ensure the safety of the collection. It was at the first venue where they were made aware of why the Japanese scientists were so enamored with the Bisti Beast.

“There before our eyes was a living, breathing Bisti Beast robotic dinosaur inspired by the Bistahieversor discovery. The curators in Japan worked with the company Kokoro Company Ltd. to create a mesmerizing, life-size reconstruction of our own dinosaur that left me speechless,” said Williamson. “In fact, we found that many New Mexico discoveries were featured prominently in the exhibition.”

“This extremely sophisticated engineering feat features some of the most realistic and authentic movements available in such a design, such as breathing lungs, moving eyes, and sweeping and dramatic movements of the head and tail,” said Marino. “This is the only dinosaur of its kind, and the only robotic dinosaur in existence custom-created based on a New Mexico scientific discovery. I feel that it belongs here with us.”

“This is a New Mexico dinosaur. This is New Mexico’s very own Tyrannosaurus Rex, and our kids need to see it, and learn about it," said New Mexico Department of Cultural Affairs Secretary Veronica Gonzales. "New Mexico needs to embrace this dinosaur and bring it home."

Museum officials found they could obtain the dinosaur used in the Japan exhibitions at a fraction of the price of what it would cost to have it created.

“The engineering of the dinosaur is such that, with regular maintenance, it could last as long as 20 years and would provide a landmark, memorable experience in the Museum as well as jump-start some badly needed upgrades,” Marino added.

The animatronic Bisti Beast was a huge hit in Japan. During a collective 218 days on exhibition at the three Japanese venues, the Great Journey of Dinosaurs drew more than 588,000 visitors.

Video: (approved for usage by NM Dept. of Cultural Affairs) 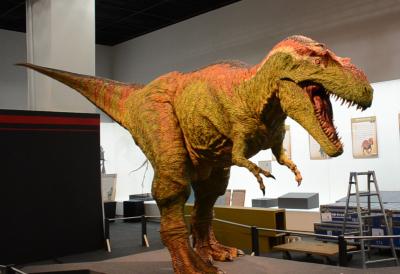 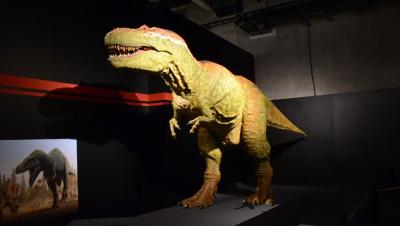